The Questions of Prometheus....

With the help of 'unexceptional' on the Guardian film blog, below seem to be the big unanswered questions from Ridley Scott's latest sci-fi outing. Some of these are fanboy questions relating to the Alien universe, some are just actual gaps from Prometheus. Either way, please know that these are SPOILERS if you are yet to see Prometheus (hurry up!).

1. If the Engineers used their DNA to create us, how does that explain other life-forms on Earth, including birds, dinosaurs etc?
2. How did Fifield and Millburn get lost in the spaceship/structure when they had just finished mapping out the insides using Fifield's geological mapping tools (red flashing flying baubles)?
3. Why did Filfield and Millburn get scared and run away when they came across an alien corpse, then get scared and move away from the life signal readings, only to move towards, and play with, a sinister looking snake alien?
4. What killed the Engineers 2000 years ago? It wasn't the black substance or foreign aliens killing now, because that came from the pristine vases....? Whatever it was piled up the bodies.....WTF was it?
5. Why did Holloway decay and die when he was exposed to the black substance but Fifield become some kind of mutated double-hard bastard who decides to come and kill everyone? (maybe because Holloway's infection hadn't progressed enough before he was killed)
6. Why did they engineer's head from 2000 years ago explode when running tests? Did that have any relevance?
7. How did David know of the the other engineer ships on the moon, and where were their engineer crews?
8. Why did David poison Holloway? (other than as a redundant plot pusher simply in the hope that he'd then have sex with Shaw and create a beast which would then face-hug an engineer to create the alien design that the engineers had on their wall in the head room? Seems convoluted)
9. Why did the engineers build a big statue of their face?
10. How does the Xenomorph get to planet LV-426 (featured on Alien)?
11. If the installation was an Engineer military base to genetically engineer aggressive species to wipe out life on Earth, why did they leave maps to it on Earth? They didn't need humans there to collect it or stow it back home; they could've just flown back and released it on Earth themselves...
12. If the Engineers intended to wipe us out, why create a new species to do so?


I found this great poster which goes someway to expelling the origins of certain creatures, and answers question 5. 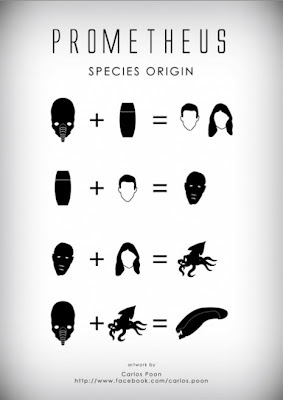 Here is an explanation to the strain of aliens featured....