LFF: Everybody Has a Plan 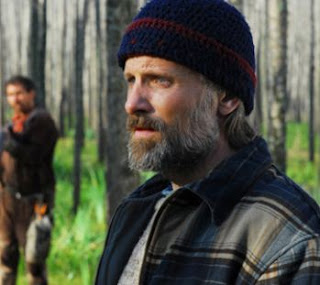 Everybody Has a Plan is an Argentine crime drama written and directed by Ana Piterbarg which sees Viggo Mortenson portray twin brothers - Pedro is rough and ready, chain-smoking in dog-eared attire amidst the deep forests on Argentina's doorstep, whilst his brother Agustin is a married doctor in the city. When Pedro comes to see his brother to tell of his cancer, Agustin seizes the oportunity to leave his dull life and head back to the rural backwaters of his childhood, not expecting to be embroiled in a local feud when he gets there.  Unfortunately for us, neither the performance or plot is very captivating, and Viggo, although a good actor, doesn't do much to separate his twins - a beard and hat serve as the main difference between them - which, I suppose, is ideal when trying to impersonate your twin! What more, the motivations of the leads are completely opaque, never quite explaining why Agustin wants to leave his caring wife and smart apartment, other than the fact he's changed his mind about adopting a baby. We even see him locked inside his study for days in a sulk without really knowing what his afflictions are! There's no doubt that the Latinos steal the film, with Daniel Fanego and Javier Godino (The Secret in Their Eyes) both putting in decent performances as small town crooks.

The cinematography was quite smart, but even then, Piterbarg doesn't utilise the forests and backwaters to the same effect as in Winter's Bone, Lawless or Deliverance, reminding us that this is indeed an amateur director - an apt one nonetheless. Everybody Has a Plan tries so hard to touch on the emotion and hardships conveyed so brilliantly in Winter's Bone that it lets the plot slide into obscurity, flitting between crime drama, love story and family drama, which eventually ends on a rather flat note. At no point are we truly rooting for any of the characters, and I couldn't have cared less when anyone died - not the best sign. * * 1/2 (2.5)
﻿
Posted by The Columnist at 06:50