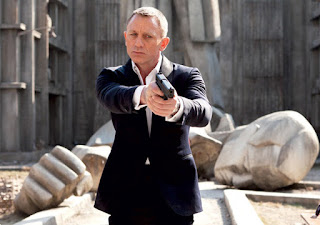 It’s been 50 years since the quintessential British spy James Bond graced our screens in Dr. No, the first of EON Productions Bond features. Since then, Albert ‘Cubby’ Broccoli has passed on the mantle to his daughter Barbara Broccoli, who oversees the projects with Michael G. Wilson, and her Daniel Craig Bond series has been said by many to be the strongest of the run, and by many the weakest. Casino Royale was met with welcome reviews from word-eating critics and fans, but Quantum of Solace less so. Her latest, Skyfall, has been met with amorous reviews both at home and across the pond, scoring a 91% fresh rating on Rotten Tomatoes. This reviewer agrees with the applause.

Skyfall was left in the adept hands of Sam Mendes, wünderkind behind American Beauty, Road to Perdition and Jarhead, and his mark on the franchise has certainly been left. His ability to bring the best out of his actors a la Kevin Spacey and Tom Hanks is visible here also, with Craig putting in his most heartfelt performance yet, and supported by a plethora of British treasures – Dame Judi Dench, Ralph Fiennes, Ben Whishaw and Naomie Harris all on top form. However, the real praise must go to Javier Bardem who plays creepy villain Raoul Silva with aplomb; it’s been a while since there’s been a villain this good, and he certainly beats all of those from a good load of the films beforehand (just wait til you see the effects of hydrogen cyanide!).  Bardem has a knack of making you feel uncomfortable in his presence, and his fantastic entry is oh-so-creepy, as he slowly approaches the screen (and Bond) delicately telling a fable about cannibalistic rats. It’s fantastic scriptwriting, and he gets the best lines. I suppose he honed his creepy psychopath persona on the set of No Country For Old Men which saw him play a sadistic assassin who makes sinister use of a cattle-prod.

One of the many joys of Skyfall is its scenes in the UK, of which London and Scotland both feature quite heavily. We see a monumental building get bombed, as well as a lot of British landmarks before a climactic finale in the desolate plains of Scotland – the Old Country. Bringing Bond home was brilliant to see, and the advertising bods certainly took advantage of that, with Aston Martin of course keeping the automobile area tied up, and Barbour making a rugged appearance also. Typical of Bond, We also have the usual globetrotting antics, with an adrenalin-packed opener in Istanbul, as well as some superb scenes in the Orient, with an abandoned island off Macau and a floating Casino demonstrating that Mendes has the perfect eye for a modern Bond director.

To mark the fiftieth year of Bond, Mendes and co. have clearly set out to reboot the franchise for another 50 years, and aside from some unexpected character turns (and some pretty obvious ones), Skyfall goes about just to do exactly that in a way that most other directors would have failed at. Martin Campbell’s Casino Royale was too shiny and new to mark the big Five-O, and Marc Forster’s Quantum of Solace was too chaotic and violent to do so. Skyfall sits somewhere else, boldly letting the franchise push forth into the new and unknown world of Bond without any of Fleming’s literature to use, but maintaining the spirit of old, of what made Bond so enthralling and enjoyable in the bygone years. The film embraces old and new, and we see Q joke about exploding pens (Goldeneye) - 'we don't go in for that anymore' and Bond talk about keeping up the old fashioned tradition of cut-throat razor shaving. The term 'Skyfall' itself is almost a nod to Citizen Kane and the famous Rosebud, a flashback to one's past. Mendes is tipping his cap to the past and future of Bond.
Yes its true, Craig may take himself too seriously, and there will always be naysayers who can’t get on board with the short, blonde, rugged Bond, but in a world of Jason Bournes, Jack Bauers (and Bryan Mills’!!), Craig holds his own, keeping the serious tones of MI6, tinkers, tailors, soldiers and spies, without looking like he’d get beaten by the first canon-fodder henchman he’d encounter. Without a doubt in my top five Bond films, and sure it’s not perfect, and the product placement is brazen to say the least, but I wouldn’t change a thing about it. In Skyfall Bond is resurrected, and well and truly back on track.
(Daniel Craig will be reprising the role for two more films, but wouldn’t it be great to see Benedict Cumberbatch play the iconic British spy? He could be a more intelligent and suave Bond, reverting back to the more charming spy of yonder. Just a thought.)