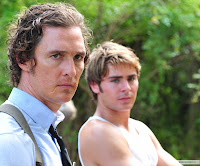 Lee Daniels’ follow up to the über-depressing Precious is this sweaty noir set amidst the sun-drenched swamps of Florida, and again, it’s rather depressing. The story sees Ward Jansen (McConaughey) return to his Florida hometown to investigate the (possible) wrongful conviction of a death-row inmate with the aid of his kid brother Jack (Zac Efron doing everything he can to shake his Disney past).  However, as the story dilutes, what we have at the crux is a love story between a 20 year old idealist and a local white trash woman who gets her rocks off on corresponding with prison inmates. The plot is more a tool for showing the existence of these backwater towns, and it’s quickly swallowed up by the murky surroundings, leaving us neither understanding or wanting of the investigation itself. What we have is instead a dirty-enseamed-sexy-wet depiction of small town Florida, and its morally-ambiguous inhabitants. It’s not very enjoyable to watch, and there are some truly horrific scenes which seem a tad out of place, and reminiscent of Precious’ more superfluous moments of abuse. It’s just a shame that Daniels feels the need to show the nitty-gritty details rather than leave some of them for the audience’s imagination, and this goes some way to attributing Daniels more to shock value and questionable authenticity rather than intelligent film-making. A rather average film is bolstered by a stellar cast and career-best performances from the leads (Kidman, Cusack, McConaughey). 3/5
Jack the Giant Slayer

Another reimagining of a classic fairy tale, and not a particularly clever one at that, the main letdown in this raucous ride is the awful CGI work on the giants. The beanstalk and action special effects are decent enough, but the big antagonists don’t even touch the sides when we think of modern CGI capability – Gollum, Transformers and the Na’vi. The main cast are alright, with Nicholas Hoult playing his usual awkward self, and with great support on either side by Ewan McGregor, Ian McShane and Stanley Tucci. It’s easy to forget that Bryan Singer was maestro behind The Usual Suspects and X-Men films, as it seems he’s lost his touch. Let’s hope he picks it up again with his upcoming X-Men outing. 2/5
﻿
Posted by The Columnist at 06:30