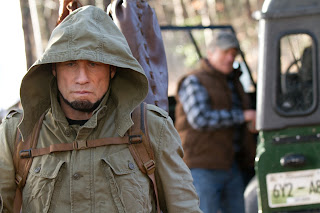 Killing Season sees two of Hollywood’s heavyweights – Robert DeNiro and John Travolta – go head to head for the first time in this cat-and-mouse thriller. Opening in Bosnia during the Yugoslav Wars, Travolta’s Emil Kovac is part of a Serbian death squad believed dead after their execution at the hands of DeNiro’s Benjamin Ford and his US platoon. Eighteen years on, and Ford is now retired to a cabin in the Appalachian Mountains, living a simple life to overcome the harsh memories of that war. Kovac, now recovered and hellbent on revenge against the American, travels to the Appalachians to hunt Ford. Without recognising him, Ford invites Kovac to shelter in his cabin during the heavy rains, and the two get along as if old comrades. Only when out hunting elk do Kovac’s true intentions become apparent, and the two begin a predator-prey hunt-off in the heavy deciduous forests.
It’s all very predictable, and Travolta, loving any character roles does his best Eastern European accent (and beard) but sadly never manages to be anything more than ‘Travolta playing an Eastern European’. The same can be said for DeNiro, who to be honest, has chosen such God-awful tripe in the last decade, that his predictable portrayal of a US veteran is still very welcome return to macho form.
There’s a lot of Kovac has the upper hand, no wait, Ford does, no Kovac, now Ford, Kovac, Ford, Kovac, Ford – it’s exhausting. The two don’t have the same on-screen charisma as Lee Jones and Del Toro in The Hunted (almost exactly the same film) but they are certainly entertaining. The grand message being an analysis of the effects of war, and men’s culpability in atrocities is a little cack-handed, with Kovac constantly narrating what he believes are insightful and meaningful truths about himself and his foe, ensuring the audience are very clear on the message: men do awful things in war, but does this make the man awful?
Overall, the film is entertaining cinema-fodder, nothing more or less. It’s enjoyable to watch the two veterans take their hands to bow and arrow – with some gruesome scenes to boot, and the backdrop is indeed breathtaking, but the blunt script and slightly odd casting leave Killing Season falling short of anything more than average. [3/5]
Posted by The Columnist at 03:22