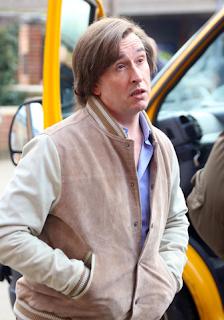 When Armando Iannucci finally buckled to fan pressure (and his own no doubt) to announce that Alan Partridge, Norwich’s ubiquitous minor celebrity, was to be getting the Big Screen treatment, it was received with two contradicting reactions: excitement and fear. On one hand it was comedy news of the year that Coogan’s hilarious creation would finally get to try his hand at cinema, but on the other was the overbearing fear they’d get it wrong. Thankfully, they didn’t.


Since Neil and Rob Gibbons came on the scene, the character has been revitalised since his original output in Knowing Me Knowing You and the first two series of I’m Alan Partridge. The Gibbons’ were driving forces behind some new programmes in the run-up to Alpha Papa’s release, namely, Mid Morning Matters (Alan’s constantly referenced radio show on North Norfolk Digital) and two one-off features, one a travel show revealing Norwich’s highlights, Welcome to the Places of My Life, and the other an Open Books episode interviewing Alan and hearing excerpts from his book. On top of this TV work, Partridge has also had a book, I, Partridge: We Need to Talk About Alan and the accompanying audiobook. In short, a small (and warranted) franchise has been built around this try-hard disc jockey – a movie was always on the cards.
The beauty of the character is that he needn’t have any kind of lofty treatment or diverse scenario to showcase his comedy talent, Alan actually works best in the most simple of situations – walking down a dual carriageway singing Goldfinger being a personal favourite. Therefore, it could have been that Alan Partridge: Alpha Papa was an elongated episode of one of his TV outings, it would have been hilarious no matter the plot, and part of me (and I’m sure other fans share this outlook) wanted just that: a 100 minute episode of I’m Alan Partridge. Instead, the writers (five of them!) decided to take a loftier concept, and go for a hostage crisis drama – it’s been dubbed ‘Alan Partridge does Die Hard’. The plot sees Alan take centre stage when one of his ex-colleagues, Pat (the excellent Colm Meaney), takes the radio station hostage following his dismissal and nominates Alan as mouthpiece for negotiations. In his element, Alan thrives as the face of the crisis, “I am siege face”, and finds himself in increasingly hilarious scenarios, finally climaxing in a chase along Cromer Pier. It’s a nose-dive into Alan’s world, and Duncan Lowney and crew have perfectly captured Alan’s surroundings, even delivering a great spin on the ‘cops and robbers car chase’ which gets to showcase Norwich’s offerings. And not only do we get to finally witness the settings of his life, but we also recognise some familiar faces in the form of Lynn, Dave Clifton, Geordie accomplice Michael, and relative newbie Sidekick Simon. Each have something to get their teeth into, with Felicity Montagu as Lynn delivering the ultimate return to form.
Although there are a few moments where the comedy is predictable and falls flat, Alpha Papa delivers exactly what it promised: to bring Alan to the big screen in force. The trailer, which featured Alan discussing the possible names for the film with some producers was a pitch-perfect example of how to whet the appetite - fans all over the web were splitting sides at his suggestions of Colossal Velocity, The Norfolk Fracture, or more prescient, Chap of Steel. The anticipation to see this complete idiot in a high-concept thriller (well, almost), was just too enticing. We’ve never seen Alan in such a tense situation (perhaps the closest being when he’s stuck at psycho-fan Jed’s house), and Coogan’s delivery of the character under such circumstances is pure comedy gold – with moments of absolute Partridge-perfection (one scene sees him try and climb through a small window with bellyaching results!).  The film is the cherry on top of a lustrous career for Alan Partridge, and certainly ties the franchise with a neat red bow, but no matter what they come up with now, they’d be hard pushed to beat those first series (who wouldn’t be?) which so many hold up as sacred in the annals of British comedy. Hopefully the Gibbon's will start work on some of Alan's own suggestions: A Partridge Amongst the Pigeons anyone? [4/5]
Posted by The Columnist at 05:33