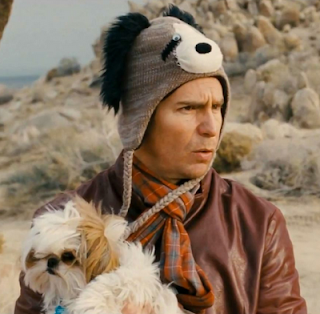 Martin McDonagh's follow-up to hit man comedy, In Bruges is as funny and violent as its predecessor. What a relief! His previous outing has been a favourite of mine since release, and I can now see this getting squeezed in somewhere as well. The basic premise sees Colin Farrell's Marty writing a script called Seven Psychopaths, although he's struggling to move on from the title. Consequently, his dognapper mate Billy, decides to use his initiative and help his struggling friend come up with some psychopaths for his script. Enter various psychopaths, an Amish preacher, a dog-loving gangster, crazy anecdotes, beautiful women and a Vietnamese priest. McDonagh doesn't let us down, that's for sure.
Aside from the genius that is McDonagh's writing - clear he cut his teeth as a playwright - which is never short of hilarious and compelling, we are also treated with Sam Rockwell up front and centre, which is something of a rarity, and he never fails to offer a charismatic and enjoyable performance. His pitter-patter with Farrell (and Walken) is laugh-out-loud most of the time, and its a wonder why Rockwell doesn't get more lead roles, as the guy is just fantastic in everything! Definitely my film of the LFF thus far, and to quash the naysayers, I say that this has been one of the best for 2012. Martin's brother John Michael, who made The Guard, needs to deliver a corker with Cavalry if he is to keep up with Martin. * * * * * (5)
Posted by The Columnist at 05:37