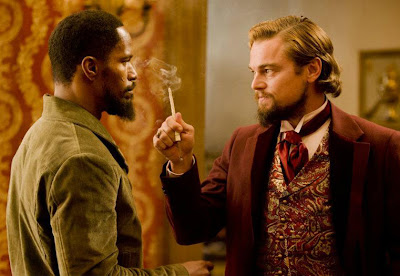 It was almost eleven months ago that I first read Tarantino’s 168 page epic, Django Unchained.  I remember after reading it the first time that I was convinced it would hit the spot when it came to Tarantino, as if all his tributes and pastiches to World cinema were going to culminate into his self-professed ‘epic’.  Admittedly, it was going to be a four hour behemoth if it followed the script to the word, but the finished article is a different beast all together. His unapologetic homage to the Spaghetti Western is a damn fine exercise in entertainment, and what a raucous hoot it is.

In keeping with the genre, Django Unchained follows a simple premise: In the Deep South, a slave is freed from his captors by a German bounty hunter, who partners up with his new accomplice to collect some large bounties. In return for the slave’s help, the German promises to assist him to a formidable plantation to rescue his long-captured wife. If the plot were any more complicated, then it would’ve missed the mark completely, and thankfully for us, Tarantino managed to keep a tight enough leash on his production to prevent it running away with itself at any point. His films sometimes play out like his interviews – like a fourteen year old spewing ideas faster than he can write them. I imagine that’s why Tarantino’s films often have present scenes segued with those of the past (a chronological mash-up made so iconic by his earlier works, Pulp Fiction and Reservoir Dogs), and rather than being any kind of genius at work, it pangs more of someone still developing their ideas as they write. I believe there is no such thing as a Tarantino final draft, as I can imagine the manchild always tweaking, always adding, always dedicating no matter how often he looks over his written work. It’s these flashbacks which often strike me as a tardy addition rather than plot device, and in Django they are increasingly staccato. What more, it seems the film has really been through the mill during editing, with some of the scripts best scenes being eradicated entirely, not to mention some of the main characters (Ace Woody!!) and the fact the entire ending has being rehashed.

As per all his previous efforts, the cast are superb, and it seems that Tarantino can certainly draw the best from his actors. As per his last film, Christoph Waltz is absolutely mesmeric, enchanting and brilliant, delivering the best lines with aplomb (he really is one of the best working today!), and Leonardo DiCaprio gets to slide out of his squeaky-clean shell to play plantation owner and all-round bastard Calvin Candie. His brown-yellow teeth, piercing blue eyes and ivory cigarette holder all contribute to his evil demeanour, as though he was a hideously racist male incarnation of Cruella de Ville. Django himself, played by Jamie Foxx, sits somewhere in the mighty shadow cast by his supports. Jamie Foxx has proved he can deliver a knockout when he needs (Ray), and were he in a usual Spaghetti Western from Leone or a peer, then he may just get away with the slightly taciturn performance he delivers but in a Tarantino Western, with caricatures and personalities so big, his ‘Good’ falls flat against the ‘Bad’ and ‘Ugly’ around him.

It doesn't really detract from the film, but is more of a pedant's comments after reading the script, but Django Unchained misses out too many crucial scenes – such as Django properly learning how to fight, shoot and work as a bounty hunter (rather than just being a natural – how convenient), but I'm clutching at straws. The crimes against slaves are horrific: beaten (and hammered) to death, eaten by dogs, the ‘hot box’ – an iron coffin left out in the Mississippi sun, branded, tortured, worked to the bone, so, as an audience, we needed to see some harsh revenge for these crimes, rather than just bullets and dynamite. In the script Ace Woody (merged into Billy Crash for the finished article) plays with a large hunting knife, and it would’ve been damn cool to see Django go up against Billy Crash in a knife fight at the end, or give Stephen the beating of a lifetime with his cane. In one scene trying to do the above, we see Django whipping a nasty slaver, but it falls flat when we realise he’s hitting the man mid-length (rather than on the tip), leaving no stripes or even marks – a mere touch when compared with what Broomhilda experiences at the hands of her captors. A single shot followed by a smart quip is great to see ("I like the way you die, boy"), but where Inglourious Basterds showed us some meaty vengeance, with Nazis being scalped, cut, shot, battered, and burned alive, Django Unchained lacked creativity in the one area where Tarantino needs no advice: violent retribution. That said, this is a Western movie, so some sharp-shooting is obviously the revenge modus operandi.

Of all his avengers, Django should stand up easily against Beatrix, Aldo or any of the Basterds given his line of work, and thankfully, Django is just about the baddest motherfu*ker in the West. One thing is for sure, given this is about a freed-slave-turned-bounty-hunter-going-to-save-his-wife-from-evil-slave-driving-plantation-owners (a.k.a 'the ultimate revenge tale'), it couldn't have been in a safer pair of hands. A ruddy great film, and a raucous adventure - like Django himself, Tarantino hits the bullseye with a shredding blast.  [5/5]
Posted by The Columnist at 08:00