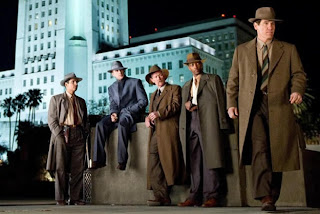 Ruben Fleischer’s follow-up to comedy double-tap 30 Minutes or Less (average) and Zombieland (very good) is a bigger picture all over. Set in 1940s Los Angeles, when gangsters were growing their empires during the aftermath of WWII, Gangster Squad sees a tough-as-nails band of do-gooder cops come together to bring down the infamous gangster Mickey Cohen. Hellbent on running the city and with a nouse for business as well as violence, Cohen was a formidable gangster, setting his sights on the City of Angels after a run in New York and Chicago. Sean Penn must’ve had a lot of fun as the psychopathic antagonist, and certainly delivers on the part – a bulbous-faced, veiny-muscled boxer, with a sneer so nasty it makes the Tommy Gun look like a lesser threat.

On the other side of the law is Josh Brolin as Sgt. John O’Mara, an honest WWII veteran (literally 'honest John') and all-round tough guy, who is tasked with forming the titular squad by gruff police Chief Parker (Nick Nolte on usual craggy form). His team includes a more-softly-spoken-than-usual Ryan Gosling as Sgt. Jerry Wooters, a slick womaniser left jaded by the War who brings the clout and style, Giovanni Ribisi as Det. Keeler – the comms guy, Robert Patrick as Det. Kennard, a gun-slinging wild-west type with a shoot-first approach, Michael Pena as his capable younger partner and finally Anthony Mackie as a seasoned street cop with a penchant for knives. After the team assembles they are given one remit: bring down Cohen by any means possible. What more, they are no longer cops - Cohen had most of the precincts in his back pocket - which means they don’t need to follow the code and can’t trust anybody. They need to fight fire with fire, which means coming off the leash.

So far so good, and this is where Gangster Squad starts getting really fun. Rather than delving into a layered gangster pic to rival the likes of Scorsese, or even Mann’s Public Enemies, we have an hour-or-so of great shoot-outs, sharp quips and stylised fight scenes. There are a few details and plot devices which seem to resolve rather easily and without explanation, but sometimes it’s best to just float with the current, sweep along with the ride.  It’s not going to set the world alight, and it’s not really one that’s going to be remembered as a great gangster film in the annals of time, but it has another quality: it’s great cinema. By keeping the characters one-coloured and script simple, the film never risks becoming a serious piece or sliding into the deep end, and although that’s usually a massive fault, it seems to work here. Instead, Gangster Squad keeps us entertained – as Peter Bradshaw commented, it’s ‘slick but shallow’. [3/5]
Posted by The Columnist at 02:57