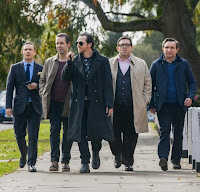 The trailer didn’t leave much to be desired for this third and final outing in Edgar Wright’s Cornetto Trilogy. However, this is one of those rare occurences where the trailer doesn’t do the film justice, and Wright showcases his best ensemble yet, with Pegg and Frost joined by stalwarts of British film and TV, Paddy Considine, Martin Freeman, and Eddie Marsan. The cast have great chemistry and provide a constant flow of laughs with Pegg’s alcoholic rocker Gary King at the helm. Admittedly, the film takes a slightly dubious turn, initiating some casual fretting, but all worries are banished with a great twist ending. [4/5]

Matthew Vaughan and Jane Goldman packed a punch with Millar’s ultraviolent comic adaptation the first time round, and hopes were certainly high for the follow-up despite their absence at the helm. It definitely doesn’t match its predecessor, but nonetheless, Hit Girl and Kick-Ass are such enjoyable characters that by the end there is plenty to relish in this sequel, even if the sweet spot is left untouched. They’ve upped the ante this time, with a greater showcase of heroes and villains including Jim Carrey’s Colonel Stars and Stripes, even if they don’t get as good as Mark Strong’s big bad and Nicholas Cage’s Big Daddy from the first outing. [3/5]