Review: Scott Pilgrim Vs The World 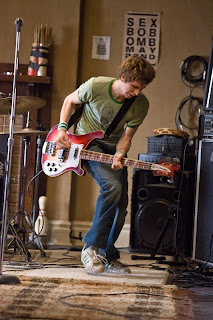 For those of you who haven’t entered Bryan Lee O’Malley’s insanely cool world of twenty-something slackers playing in crazy bands and occasionally passing through cyberspace, then you’ve been missing out. The manga-influenced comic books set in have reached cult status and are a real treat - combining fast quipping banter with histrionic fist fights. Edgar Wright’s latest outing is a dream project, allowing him to play with the fantastic dialogue as much as the action; two of his film’s most recognisable traits (see Hot Fuzz).
The story follows Scott Pilgrim, a lazy 22-year-old who is currently between jobs (what jobs exactly?). He shares a one-bed flat in (opposite his parents’ house) with gay roommate Wallace Wells and plays bass in a band called Sex Bob-omb. His world is turned upside down when he meets Ramona Flowers - an Amazon delivery girl - who transpires to have baggage in the form of seven evil exes - all of who Scott must defeat in order to date her. This zany story plays out as either a fantastical homage to pop culture and Nintendo gaming of the eighties and nineties, or alternatively (and more likely), the majority takes place in our hero’s head.
Wright’s introduction is one of the best moments, as we are attacked with a punky Sex Bob-omb track over a fluorescent opening credits, and as the band riff harder and louder; Wright is giving us an example of things to come. The whole movie is tinted with bright colours and neon strobes and doesn’t ease up until the end credits have rolled. O’Malley’s creation pays tribute to so many attributes of twenty-something culture - music, art, video games, comic books, fashion, relationships - that it’s impossible not to love element if you’re watching as a teen or twenty-year old, and those older will feel the pang of nostalgia; it’s just so evocative of that culture. Michael Cera embodies just the right amount of awkward charm to pull off the lead better than anyone I can think of, and after the rigorous fight-training and post-effects stunts, he also looks good kicking some ass. His social group of misfits are portrayed with charm by supporting cast Mary Elizabeth Winstead (Ramona Flowers) Anna Kendrick (Stacey Pilgrim - Scott’s socialite sister), Alison Pill (Kim Pine - drummer), Mark Webber (Stephen Stills - the talent), Kieran Culkin (Wallace Wells - gay roommate) and the fantastically dry (Julie Powers). The core group are so perfectly cast that you wonder if they were O’Malley’s inspiration when writing the comics. Besides Scott’s pals, we also get the acting chops of Chris Evens, ‘Superman’ Routh, and Jason Schwartzman (whose childhood parker was used as Scott’s coat in the film).
Wright has done a sterling job of converting Scott Pilgrim from the medium of comic book to film, and the finished product would rank amongst the best comic adaptations ever. The film feels like a comic book - Wright transfers the pages onto screen with such finesse, and a panning shot which labels the components of Scott’s flat is pitch perfect: “Scott’s coat; Wallace’s coat (better); Television (Wallace); Everything in Kitchen (Wallace); Clothes on floor and stuff (Scott); Wallace’s toothbrush; Scott’s toothbrush (Wallace paid for it); Wallace’s socks (on Scott’s feet)”. This scene is adapted with utter genius - and possibly tells more information about Scott (and Wallace) than anything else in the film. Scott is essentially a freeloader, even though a loveable one; and Wallace is one of the beams upon which he rests his social ineptitude. There are so many quirky scenes like the aforementioned that will keep all the comic fans happy, and with a director as comically aware as Edgar Wright, it was inevitably going to be the coolest film of the year.
Of the seven evil exes it is Evans and Routh that steal the show, the previous being utterly hysterical as skateboarder-turned-filmstar Lucas Lee, that he actually steals the scenes he shares with the others. Routh plays harder-than-nails Todd Ingram, bass player for The Clash at Demonhead who gains his powers from his vegan diet. Their fight scenes with Scott are brutal, although Wright uses (Adam West’s) Batman-style KROWWS and TWUNKS flailing across the screen in anime fashion making the violence as amusing as its source material.
Not only is Scott Pilgrim Vs The World a belter of movie, but it’s one of the most enjoyable cinematic experiences this year (if not of the last 10 years). Just as entertaining for hardcore Pilgrim fans as newbies, this film is sure to rock your world and has the best soundtrack heard for ages. Go and see it guy….or like don’t…and stuff.