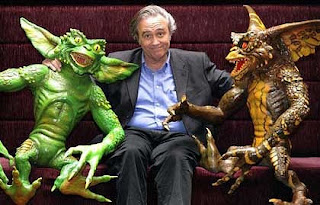 After seeing the ludicrously fun The Hole 3D at the BFI recently, it seemed fitting to focus on Joe Dante for the latest instalment of the “Great Directors” series. He is a director who has been too absent of late, and for the generation of late seventies / early eighties babies his filmography is an A-Z of our youths - a pang of nostalgia carried with each entry. His solo debut feature was Piranha (1978), and this dabble with B-movie gore and other-worldly creatures set in motion his creativity with special effects and his storylines centred around strange or alien beings. His catalogue of directorial duties during the eighties and nineties includes The Howling (1981), Twilight Zone: The Movie (1983), Gremlins (1984), Innerspace (1987), Gremlins 2: The New Batch (1990), Small Soldiers (1998) and a stint on childhood favourite TV series Eerie Indiana (1991-92). What is so great about Dante is his uncanny ability to accurately portray children and their emotions, particularly when under duress or placed in a squeamish scenario. He is the scary version of John Hughes; where Hughes had one of the lead kids overcoming bullying, dealing with tyrannical teachers and dodging responsibility, Dante’s kids are dealing with werewolves, infestations of critters, hiding from living nightmares and coping with unexplained mishaps. He’s like Hughes through a Stephen King kaleidoscope.

I think Gremlins would have to be a childhood favourite of mine; a film ubiquitous with days off school feigning illness, or late night sleepovers with a kilogram of fizzy laces. Dante enters the mind of children and his films see things as they do without appearing contrived or trying too hard. His direction appears effortless and fun, and his storytelling is second to none within the genre. The Hole 3D is a return to form for director (after some TV work a few debacles such as Looney Tunes: Back in Action) and one of his freshest features is his casting of non-annoying kids - a very rare trait in Hollywood these days where most of the child-acting population has a face you just want to punch and a smile which only exacerbates irritation - see One Fine Day or any of the new Narnia films. I recommend his latest feature and welcome Dante’s return to cinema; if only there were more directors producing similar material.