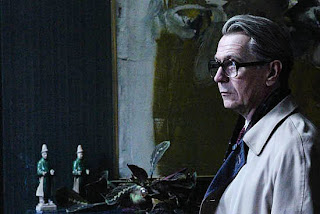 Tinker, Tailor, Soldier, Spy is an espionage thriller from ex-spook and famous novelist John Le Carré. The first adaptation was the BBC’s excellent mini-series which saw Alec Guinness don the spectacles and intelligent pizzazz of spymaster George Smiley, and as always with that brainy bunch over at the Beeb, their rendition was extremely well-received by Le Carré aficionados and critics alike, so Thomas Alfredson’s (Let the Right One In) newest adaptation has to show some serious promise to avoid been eclipsed by its predecessor.

Luckily, the latest teaser which has just gone live over at The Guardian website will have stirred a sigh of relief amongst the Le Carré elite, and it looks as though the stellar cast and crisp direction will make this a hit with the critics (and Oscar perhaps?), as we see Gary Oldman take on the role of Smiley, with support from Benedict Cumberbatch (everywhere at the moment!!), Mark Strong (the human chameleon – he can play anyone), Tom Hardy, Colin Firth, Ciarán Hinds, John Hurt and Stephen Graham. And boy what a great teaser – my film glands are salivating. Check it here… http://www.guardian.co.uk/film/video/2011/jun/30/tinker-tailor-soldier-spy-traiker
Being a huge fan of what I’ve read of Le Carré (The Spy Who Came in from the Cold is a masterpiece), and having seen the mini-series of Tinker, Tailor and it’s follow-up, Smiley’s People, this new film has moved from very anticipated to gosh-darn it I am trembling with excitement (hyperbole). It has the makings to be the sleeper hit of the year, and like The King’s Speech, it looks like it has the script and acting chops to carry it globally.
To give a bit of a rundown (without spoilers), the story sees retired spook and right-hand man to Control (MI6’ head of operations), George Smiley, being pulled from retirement to investigate a possible Russian mole in the Circus (Le Carré’s name for MI6 due to its location), with the four heads of departments as the most likely suspects. Smiley recruits the assistance of head Scalphunter (the field agents responsible for assassinations and the dirty work) Peter Guillam as he moves through the murky waters of the intelligence fraternity to smoke out Karla’s mole (Karla is the codename of Smiley’s Russian nemesis). Utterly compelling and heralded as one of the greatest spy stories ever, this is one to look out for.
To give a comprehensive analogy of the names and departments referred to in Smiley’s work, below is a guide to the Circus and its tradecrafts:


As always, any thoughts on the teaser or comments above are to be posted below. Will be interested to hear what is your favourite spy novel / film / TV series? I’ll kick it off: Favourite spy novel – The Spy Who Came in from the Cold; film(s) – Bourne Trilogy; TV series – Tinker, Tailor, Soldier, Spy.
Posted by The Columnist at 10:10