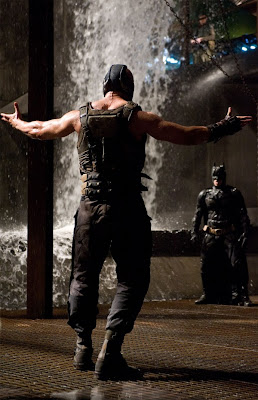 Before IMAX showings of Mission Impossible:Ghost Protocol the audiences have been treated with a six minute snippet of Nolan's final Batman feature The Dark Knght Rises. For those of you not wanting any spoilers at all stop reading now. The piece starts with Commissioner Gordon looking a little more gristled as he speaks to the crowd at Harvey Dent's (aka Harvey Two Face) funeral. We then cut to a jeep with three prisoners wearing head-bags being driven through a foreign field. They pull up to a turboprop aircraft where we meet Aiden Gillen's slimy CIA agent with some other agents. One of the prisoners is clearly a wanted man, yet before the other two are abandoned, the CIA take them on board after hearing they might know something about the masked criminal, Bane. After some CIA extraction techniques it becomes apparent after hearing a muffled voice that Bane is one of the two prisoners. Now, I don't want to dwell on it because it seems to have caused quite a stir,w but it is true that most of what Bane says is completely inaudible, but it sounds so scary and intimidating, that it actually seems better that you don't know - you can just imagine the worst. Bane is a beast! Just as all hell is about to break out between the prisoners and the agents, a much bigger aircraft flies above them and releases Bane's aviator squad on wires down to the plane below. Cue a classic Christopher Nolan setpiece - boy that guy can entertain - where we see Bane's unit wing walking whilst firing machine guns through the windows, and after some in-cabin carnage, the plane begins to lift from it's back end as the wires from Bane's men are dragged by the far superior airplane above. Soon there are bodies rolling all over the cabin in a scene reminiscent of the hotel corridor in Inception, and after some fussing with a blood transfusion and words exchanged with the prisoners (along with bullets for course), Bane, grabbing hold of the main prisoner uses a remote to blow up the aircraft, which then drops from the sky to reveal only the two men hanging from a wire as they are dragged by the aircraft above.
A fantastic opening sequence which was followed by a montage of great glimpses shown in the latest trailer - as well as some extra footage of catwoman and some different camera angles.
Nolan is back baby, and if this snippet is anything to ego by, then maybe, just maybe, this will be the best Batman film. It will certainly be great to see someone as visceral and hulking as Tom Hardy opposite Bale in this final chapter.
Posted by The Columnist at 09:58