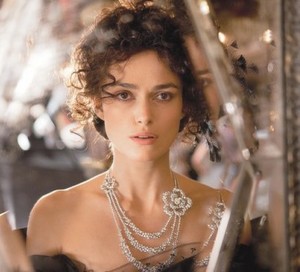 Joe Wright was considered something of a British wunderkind after his brilliant adaptation of Atonement. The film had all the ingredients of an instant British classic: well cast actors, beautiful settings, immaculate script, sweeping scenery, magnificent camerawork, dramatic score.... It was no wonder it was such a critical success, and is still one of my favourite literary adaptations to date. He had the film industry in his hands and could've done pretty much what he wanted, though strangely enough, after Atonement he made the disappointing The Soloist about a former cello prodigy and then the excellent beat-pumping hit-girl thriller Hanna, so his career was looking anything but consistent. Having thus far peaked with his second movie Atonement and with his fourth, Hanna, following closely behind, Pride & Prejudice and The Soloist both lacked the vision and relevance of the aforementioned and slump somewhat on his CV. In keeping with his inconsistency, Anna Karenina sits somewhere in between.

This latest work is something of a marvel to watch, with most of the action taking place in a Russian theatre which acts as the main stage shifting between all the settings - inside and out. The backstage walkways and ladders act as the streets of Moscow and St Petersburg, and the entire appearance makes for unique viewing, even if at times you might struggle to know where exactly they are supposed to be. It's certain that after this bold depiction of Tolstoy's much-loved classic, no-one will doubt Wright's creative genius, although some could argue that it would perhaps be better suited in a theatre - the Old Vic or The Globe perhaps.

Aside from the beautiful vision of the story, Anna Karenina has little else to offer. As someone who hasn't read the book I was granted a fair amount of freedom to watch the film without having pistols at the ready - my wife on the other hand, a huge fan of Tolstoy's supposed masterpiece, didn't even make it into the cinema. The lead casting alone was enough to dismiss the film entirely where my wife was concerned, and from speaking with other literary lovers, she isn't alone there. For me, Keira Knightley is one of the most annoying actors working, and what makes it worse, is that she's in bloody everything. I'm not going to dismiss her entirely, as I've given her due credit for Atonement and Never Let Me Go, both where she plays a vacuous and shallow woman, but I can't see past her drama-student overacting and constantly protruding chin. She is someone who I honestly believe is cast on hype alone, and after seeing her in A Dangerous Method think her the worst of Hollywood's leading ladies. This is perhaps where Wright made his most glaring mistake: casting Keira Knightley as Anna Karenina. She doesn't just suck at the role, but she is completely overshadowed by a very strong support cast - Matthew McFadyen, Domhnall Gleeson, Jude Law and Ruth Wilson. These four own the scenes they are in, and luckily for us there's usually one of them on screen at all times, although you'll have to forgive the awful love scenes with Knightly and Aaron Taylor-Johnson (he's not much better than her). McFadyen, Law and Gleeson are the real show-stealers, with Law in particular delivering possibly his finest role as Karenin - convincing us completely of his plight and struggle, whilst McFadyen offers the comic touch as Anna's buffoon brother. Aside from the central lovers, Wright has produced a fine cast, it's just a shame that you can't see past the focal blunder - perfect casting of Anna and Vronksy was essential.

Looking back on the film, the scenes I remember most are all those at Levin's country farm, and it's no doubt that Wright is most brilliant when working outdoors - just think of the wonder with which he delivered Atonement's scenes at the Tallis home or of Robbie in the war - and it's no different here, with field-workers rhythmically swinging their scythes in the golden glow of sun, haystacks littering the land into the horizon. Possibly that is what seems missing here, there is not enough outdoor material, not enough sweeping landscapes and breathtaking views. Anna Karenina has too much scope and grandeur to be delivered through the medium of a theatre set, and it's literary success only adds to it's almost-mythical scale, with claims by many that it is the greatest book ever written. Whether that is the case or not, Wright's delivery and vision felt like it doesn't live up to the novel, let alone the hype that comes with it.