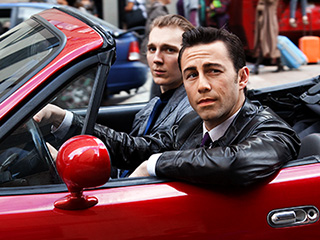 Rian Johnson broke onto the scene in 2005 with his high-school noir Brick. The film was made for $500,000 and featured Joseph Gordon-Levitt as a high-schooler who turns detective when his ex-girlfriend goes missing after a cryptic phone call. The film was a fantastic achievement – combining the elements of detective drama, film noir and high-school comedy, and launched JGL into the mainstream. Johnson even created his own fifties-inspired vernacular for the film, much like an old Raymond Chandler novel. His second feature was the con-men extravaganza The Brothers Bloom which had a strong central trio with Mark Ruffalo, Adrian Brody and Rachael Weisz, and played out like a Bourne film directed by Wes Anderson. His characters pulled off greater and greater 'cons' whilst globetrotting between obscure and secluded locations. With his latest feature, Looper, Johnson’s scope has widened and his horizons broadened. It’s certainly his most accomplished and successful film to date – catapulting him into the public eye of cinemagoers all over the world.

Looper’s premise is as follows: In the year 2072 time travel is accessible but outlawed, only used by the most nefarious of organisations. Due to the lack of disposal grounds, the mob use time-travel to send back their targets to 2042, where a looper (assassin) waits to eliminate and dispose of the body without any future trace of their existence. However, when an organisation feels the heat or gets indicted, they will often tie up the loose ends and ‘close the loop’, which involves sending the looper’s future-self back to his younger self to be killed. The young looper gets a grand payday and a pat on the back to live out the remaining thirty years in retirement. There is only one rule: never let your loop escape. If you do, then Abe (the mob-placed man in charge of 2042) and his Gat Men (think black-clad heavies with large heavy revolvers, or gats) will hunt you down and either kill you, or chop off your limbs to stop your older self from escaping. Either way, it ain’t pretty. Lo and behold, it’s not long before our hero, Joe, confronts his older self for elimination, but as his older self is Bruce Willis, he isn't so easy to kill. Cue wild chase scenes, mind-bending time travel narratives and a gun fights aplenty. 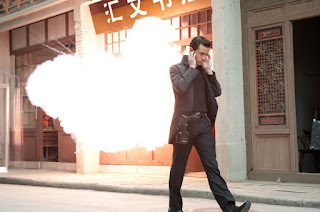 Aside from an utterly original plot, Johnson is up to his usual tricks and brings us a cinematic pastiche of cold-as-ice one-liners, sharp dress,  high-grade weaponry, cool backdrops,  even cooler names – La Belle Aurore is the club – and a strong ensemble cast (here we have Joseph Gordon-Levitt, Bruce Willis, Emily Blunt, Jeff Daniels, Paul Dano and Piper Perabo). The principle city remains unnamed, and looks like an extended slum meets a dilapidated business district (the future doesn’t bode well for us), but still Johnson makes it the perfect setting for a futuristic crime thriller; old fire escape ladders, abandoned vehicles, neon signs and sparse empty streets make up the sprawl. Despite their being no real focus on the city (New Shanghai gets the best treatment in a very cool montage sequence), its presence is felt, especially when the action relocates to a secluded Kansas farm where Joe and Sara (blunt) are both dressed in faded khaki attire in keeping with the scenery, but the Gat Men who follow from the city are head to toe clad in black. Johnson’s eye for detail is impressive, and each knook and cranny of Looper makes for very unique viewing, simultaneously evoking excitement, fear and suspense.

Very important to the film’s brilliance is Joseph Gordon-Levitt as Joe. It’s his story we follow, and he’s a very likeable guy – a sharp-dressing, quick-witted looper with the time and dedication to learn French and save half of his fortune. His lifestyle is that of a bachelor, with drug-taking, drunk-driving and clubbing in abundance, and he’s the coolest cat of a gang of cool cats – some of whom have weak telekinetic powers (a new mutation called TK) enabling them to float quarters. What was so impressive about his performance, was how accurately he nailed Bruce Willis’ nuances and facial expressions – its uncanny – made all the more effective by a prosthetic nose to look more like his older self. Joe is also a man of nostalgia, driving a cherry red Mazda MX-5 Miata and dressing in fitted leather jacket and tie – as Abe points out “the movies you’re dressing like were copying other movies. Goddamn twentieth century affectations”. It’s interesting, film fans will always be in search of that perfect film garment – whether it’s the Drive scorpion jacket, Wolverine’s leather biker jacket, or even Tyler Durden’s red leather blazer. Even if you Google ‘Joe’s jacket Looper’ or something to that effect, there are loads of forums and blogs with people in desperate search for Joe’s garments from the film – especially the three jackets we see him wear: how ironic. Rian Johnson must be smirking at that.

It’s not only the wardrobe which is drumming up web-based searches, but the high-grade weaponry on display is a boy’s dream. The looper’s weapon of choice is the blunderbuss – the looper's street-weapon, long, clunky and extremely effective at short distance. By contrast, the Gat Men use a gat (like the G-Men of the fifties) - a huge nickel revolver used for more accurate shooting at a greater distance. Kid Blue even shows us some skills with his piece, and takes pride in the gat he carries.  Another cool pistol is seen during the film’s best sequence – a thirty year montage that sees Joe move to New Shanghai, run out of money, join the mob, and start racketeering with a gang wearing sleek black uniforms – Joe carries a very modern pistol which looks like a cross between a Sig Sauer, a cowboy's revolver and a flare gun. This presence of gunplay would suggest homage to the Spaghetti westerns of Leone, where the way of the gun is the only way of life. 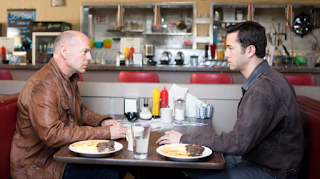 Aside from awesome weapons and a great lead performance from JGL, we also have Bruce Willis as the heavy-hitter, the old faithful hero whose presence alone can up the ante for any action sequence. As per usual, Willis is superb as the seasoned assassin, now very worldly and all the more sardonic as a result. In one scene reminiscent of Michael Mann’s crime opus, Heat, we see Young Joe and Old Joe sat in a diner as they exchange rhetoric and try and figure out each other’s game plan. It’s a master-class of scriptwriting, and very touch-and-go as to who will have the upper hand when the inevitable clash happens, much like with Neil McCauley and Vincent Hanna in the aforementioned crime saga. The Joe's even touch on the subject to time-travel, but Willis quickly stomps out the discussion - “we’ll be here all day making diagrams with straws” - showing Johnson wasn't planning on the audience getting bogged down in the concept - it's either Terminator rules or Back to the Future rules after all (Looper is Terminator rules - the time machine stays in the future). It’s Bruce doing what he does best – a one-man mission to kill the big boss of the future – only this time he has his younger self, all the city’s Gat Men, and an eager young rat of a man called Kid Blue all on his trail. As you can imagine, it gets messy but Johnson never loses sight of the goal. Lose ends are tied, wrongs are righted and this isn’t all done with a ‘nice easy’ ending, but instead with a rather shocking conclusion, in keeping with this brutal world they all inhabit.

Looper is my film of 2012, and a shoe-in for one of my favourite films of all time. I’ve been a strong advocate for Rian Johnson since he debuted with Brick, and have been following production on this latest film for the past couple of years. It doesn’t fail to deliver, and you’d be hard done by to find a cooler sci-fi movie out there. There are no good guys here, even the innocent Sara is riddled with guilt from her past, and everyone else is as shady as hell – loopers, Gat Men, strippers, hobos – it could be a neighbour to Sin City. There is no question that Looper deserves five stars (only my second of the year after The Raid); it’s a blend of sex, wit, style, crime-travel on the rocks with a slice of cucumber.