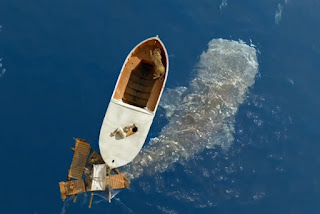 Ang Lee is a very diverse director, with a filmography containing the likes of drama (The Ice Storm), martial arts (Crouching Tiger Hidden Dragon), super-hero (Hulk), love story (Brokeback Mountain) and now existential adventure (his masterpiece), Life of Pi. Yann Martel’s ‘unfilmable’ novel has been translated onto the screen with such perfection that Lee will be hard done to ever reach these levels again. Many would argue the plot tries to be more profound than it is, but for this reviewer, Life of Pi is the exact opposite – it allows the story and visuals to wash over you without any expectation of a grandiose understanding. It just needs to be enjoyed.

As with his ground-breaking visuals and stunt-work on Crouching Tiger Hidden Dragon we also have here an example of his boundary-breaking scope and versatility to deliver rich visuals. I haven’t been this impressed by eye-candy since Avatar – both of which stand a head and shoulders above other 3D films I’ve seen. There was no head-tilting, squinting, wiping my glasses, readjustments needed here, as Life of Pi delivered stunning aesthetics aplenty.

Visuals aside, the story is one that has to be seen/read/heard. In short: Pi, a young Indian boy growing up in an affluent family in French-India (Pondicherry), has a dream lifestyle living amongst the colourful animals inhabiting his father’s zoo in the town’s botanical gardens. However, a disagreement with the government over the public land leads the family to ship off to Canada where they will sell the animals and start a new life. When a violent storm hits their vessel, Pi is left stranded on a lifeboat with an orang-utan, hyena, zebra and a Bengal tiger named Richard Parker. What follows is a marvellous allegory into God, existence and the meaning of life, via a number of feats, encounters, spectacles and bearing witness to the magnificence of God’s creations.

Certainly one of the finest examples of pure entertainment I’ve seen in ages, and something that children and grandparents alike would relish. The cast are very likeable, but this is Ang Lee’s achievement, with all the credit going to him. If you haven’t already, go see it at the cinema before it’s too late, as this is undoubtedly the most pleasurable viewing you’ll have all year. 5/5
Posted by The Columnist at 02:41