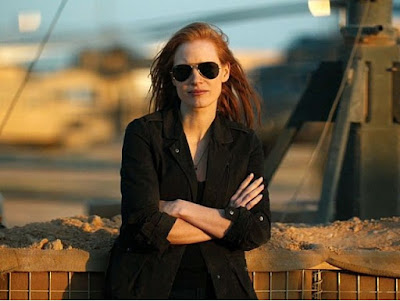 Although Lincoln, Django, Pi and Fantine have been on the tips of tongues for the past few weeks, it's Maya and Dan, the two leads from Kathryn Bigelow's hunt-for-Osama epic Zero Dark Thirty, which have initiated the most chatter in every sphere. It's been impossible to read any daily, weekly or online news site without seeing something of the backlash to Bigelow's latest film, which sees the CIA torturing terrorist suspects on Agency Black Sites. The scenes are hard to swallow, but are vital to the bigger picture. Zero Dark Thirty is like watching an entire series of The Wire in one go without breaks, as a team slowly build there case and get closer to the prize. Contrasting with her last film, the multiple Oscar-winning The Hurt Locker, Zero Dark Thirty doesn't play out like a war movie, but instead more like an investigative drama; this is more Tinker Tailor Soldier Spy than Green Zone, and although it couldn't be further removed from the English spy classic, it also shares a lot of similarities: slow-building narrative, contemplative argument, arduous bureaucracy and mysterious characters. We are witnessing one of the World's biggest ever investigations/manhunts through the medium of Hollywood. It would be easy to get bogged down in cliche, and present all-American heroes in the running, but Bigelow (and screenwriter Mark Boal) hold back from this, delivering more of a fly on the wall approach. Many scenes early on are discomfiting, particularly the torture scenes which start the movie off - Jason Clarke is terrifying as Dan, a Dog-eared CIA operative in Islamabad - and also the briefing meetings with White House staff, which are so clinical in approach, we sometimes forget that thousands of people have died during this search operation. It's impossible not to become emotionally involved in the case early on, so privy are we to the inner machinations of the search. However, this never sits well, as we are never truly sympathetic to the mysterious leads - in fact, we would reveal more on our faces throughout the viewing than any of the characters depicted on screen. This is where we have to focus on Maya, Jessica Chastain's excellent incarnation of the CIA hotshot who was supposedly the driving force behind Bin Laden's eventual capture/murder.

Maya is an enigma. We never get to know much about her, and rightly so. She is Zero Dark Thirty's George Smiley - always one step ahead of her Agency colleagues. We learn that she was recruited out of high school, which in itself shows a great deal about her - how many Agency staff can really be selected and chosen by 18 years of age? Her tenacity to get the job done is never condoned by a cheesy backstory of losing a loved one, or having her father work in the twin towers on 9/11. That would only have served to detract from Maya, who is not only the investigation's driving force, but also the film's too. Chastain's beauty and soft Southern lilt never undermine her sheer badassery, and as she globe-hops between various locations to develop her theory that the key is finding Bin Laden's most trusted courier, she never falls short of calculated operative. It's all she knows - of her twelve year tenure with the CIA, she has only done one thing: search for Osama. She defines the word operative. In one particularly great scene where the core group are briefing the CIA Director (James Gandofini), Maya, a lone woman in the corner speaks up about Bin Laden's whereabouts only to be asked who she is, her response 'I'm the motherfucker that found this place' (about Bin Laden's compound). Her unequivocal and direct response is typical of her character: so single-minded and unwavering in her pursuit of Bin Laden, she really is a relentless motherfucker. She spends hours watching gruesome interrogations, hours staring at computer screens, and hours giving and listening to debriefings. She is not Jack Bauer, Jason Bourne or Evelyn Salt. She owes more to John Le Carre, and only through long, arduous days and nights of reading will she get her man. This is what makes Zero Dark Thirty so brilliant - it's delivery of a real story, based on actual accounts. I guess that's also what has made the reaction to torture so omnipresent - it just seems so damn real. By the time we reach the climactic finale (bring in the SEALs), we forget that we know the outcome, such is the two hour investment which precedes it.

I think many countries let out an exasperated sigh on all the melodrama surrounding the torture scenes (as did Bigelow herself no doubt), afterall, it really wasn't all that shocking a concept to fathom: the CIA have tortured terrorist suspects. Stop the press! Batten down the hatches! The US Senate is about to spit it's dummy out, while simultaneously throwing all its garish expensive toys out of the pram. We're all thinking the same thing over here - has the US government missed every series of 24? Not to mention a handful of other series and movies which feature hardened operatives using questionable and at times reprehensible techniques to get some answers? Why freak out about it now? You realise when you see the movie why it's had such a strong reaction, those few words before the film even started... 'Based on actual events'. This is why every news station and blog has some Senator or other spitting anger at the idea of the good people of the US of A ever committing such acts of atrocity, but we all know it happens. It must happen. I don't agree with it, and don't condone it, but that doesn't stop it from being true. I remember the shocking images of troops abusing prisoners at Guantanamo (made the more shocking by the woman present in most), and how true it rings here in Zero Dark Thirty. The men and women operating in these scenarios, tasked with extracting vital information in the war on terror are bound to use such methods, so if anything, Bigelow can only really be chastised for ringing true; bringing a taboo subject into the spotlight. Tarantino has done it with slavery in a way never done before, and Bigelow has done it with torture, albeit as a tool for her story, but still a front-on tackle of a difficult subject nonetheless. Bravo, I say. Zero Dark Thirty manages to shimmer in the twilight between docudrama and spy thriller, and although not the most enjoyable film, one certainly has to give kudos to Bigelow and Boal for making such an entertaining thriller from a source with so much red tape.  4/5