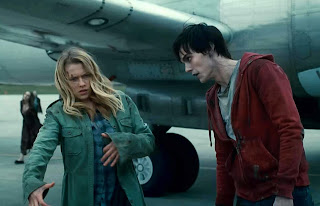 Based on Isaac Marion’s novel of the same name, Warm Bodies is not your traditional love story, as here the protagonist happens to be a monosyllabic zombie called R. It’s a fun film with a great comedy performance from razor-cheeked Nicholas Hoult, and there are genuinely funny moments from the offset as we see R and Julie (the lovely Teresa Palmer) try to get along despite their profound differences. A montage showing how the lovebirds pass the time in R's abandoned Boeing home is funny and heartfelt, and always with tongue firmly lodged in cheek. Even the mumblings and attempts at communication between the zombies is hilarious in places, with the support (zombie) cast clearly having a ball on set. However, what starts as a neat horror-comedy does get a little bogged down in a greater plan to resolve the zombie crisis by way of awful clichés, as well as throwing in some tragically-bad acting from Dave Franco (the even more useless younger brother of James) and John Malkovich who stars as Julie’s tough-love father and General of the human survivors, but overall it’s enjoyable cinema and worth seeing for Hoult’s great delivery . 3/5 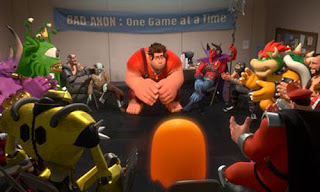 
Wreck-It Ralph had so much promise when you look at the package on offer: Disney, John Lasseter, 3D, John C. Reilly, Rich Moore (The Simpsons and Futurama). Yet still, it didn’t manage to compete with any of its Pixar counterparts, and the main reason for that is due to target audience. Where Pixar, and in some cases Dreamworks, aim to target a broad spectrum of audience with plenty to keep the adults amused, Wreck-It Ralph decided to focus primarily on targeting kids and thus dumbed-down a lot of its potential. The main flaw was it’s extremely irritating co-lead Vanellope – a character no self-respecting adult could enjoy as she is reminiscent of everything bloody irritating about kids that age. Her presence can be best described as being like having an chatty and overly-confident girl testing ringtones beside you throughout Tinker Tailor Soldier Spy. It’s a real shame as Wreck-It Ralph showed signs of greatness, with the Hero’s Duty segment perfectly realised, and the ongoing thread as a result a highlight throughout – especially Jane Lynch’s voicework as Sergeant Calhoun. Aside from Ralph himself who is great, it’s the supporting characters that make Wreck-It Ralph enjoyable, with a great showcase demonstrated at a support group for bad guys – Zangief (Street Fighter), hatchet zombie (House of the Dead), ghost (Pac-Man)Kano (Mortal Kombat), Bowser (Mario) and Doctor Eggman (Sonic) all in attendance – as the film’s main highlight. Great for kids and just about enjoyable enough for adults, it’s a shame they didn’t do more with it, but the universe of gaming is well-realised and has great potential for future additions to the franchise. 3/5 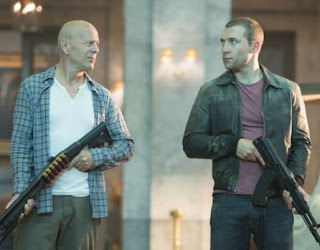 A Good Day to Die Hard

Why oh why they decided to make another addition to the Die Hard series is beyond me, but I figured that if they were to do it again they would work harder on producing a better baddie – as Hans Gruber is always referred to as a highlight from the first film. But no. As with Die Hard 4.0 they decided that what we needed was another flurry of action on a bigger scale and with as many stupid quips as possible. Unfortunately, A Good Day to Die Hard is by far the weakest of the five film franchise, with the most generic and badly-developed villains ever put on screen. Russians have been getting a bad rap in Hollywood for the past decade (like Brits in American history or war films), and here they have reached a new level of single dimension. The premise this time round sees John McClane head to ‘mudda Russia’ to bring back his estranged son only to discover that his son is a gung-ho CIA agent in the middle of a Russian extraction mission (of course he is!). The whole thing stank of laziness, merely adding to the franchise for the sake of it - pure unadulterated studio fodder. It tried so hard to be as good as the latest Mission: Impossible film or even to compete with Tom Cruise’s latest vehicle, the underwhelming Jack Reacher (both have the same support lead – Jai Courtney) but unfortunately it fell flat and came off worse than both the aforementioned Cruise films. A pointless edition to Die Hard, it was clearly a very bad day to die hard after all. Note that the rating is purely based on Bruce Willis and his unrelenting ability to entertain even in the most defunct of action pictures. 2/5