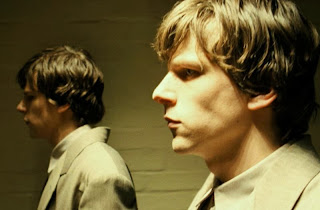 An adaptation on Dostoevsky’s novella of the same name, The Double is Richard Ayoade’s (Submarine) second feature film, this time set in what seems to be a dystopian England, and contrary to most dystopia’s, it appears to be set in the past as opposed to future. Jesse Eisenberg plays Simon James, an awkward office clerk who squirrels away in a dowdy booth for a government department which quantifies people’s behaviour into graphs and charts. His routine is marred by constant battles to make people recognise or remember him – whether it be colleagues or door security – and this daily emotional beating has left him a shadow of a man. Most of his days are spent dreaming about the copy-girl at work, Hannah (Mia Wasikowska), but even then, his attempts at any kind of interaction are weak and feeble.

This agonising existence is rocked when Simon’s doppelganger – also played by Eisenberg – James Simon, shows up one day. Unlike Simon, James is charismatic, confident, tough and  knows how to talk to women, and more importantly, Hannah. What starts as an awkward friendship between the two, a kinship that sees James as mentor to Simon’s pupil, takes a radical shift as James starts to take advantage of Simon’s weakness, and completely usurps his life, stealing his ideas, woman and flat.
It’s a very morbid tale, almost exclusively shot at night (or in sparsely-lit indoors during the day), which never eases up or offers any kind of relief. No rays of sunlight, and no rays of hope for Simon (or the audience) – although there are a few moments of relief with some comic turns from Ayoade’s pals. The tale itself is intriguing, and its baffling concept isn’t missed by its protagonist or us, as everyone starts to scratch their head wondering how no-one can see that two men are indeed the same man – Simon’s cries ‘he has my face’ fall on deaf ears. However, one scene sees him ask a colleague to look closely, and he admits that indeed they do look alike. This is the brilliance of The Double, people can see the resemblance of the two men, but no-one really gives a damn. Even Simon’s own mother is constantly forgetting his name. This is a man who merely exists rather than lives; drowned in a bulky, beige suit, walking hurriedly with a permanent shrug and darting eyes: he lives like a rabbit in headlights. It’s a wonder how he managed to make it this far through his life of torment.
Ayoade’s second film misses out on the comedy and likeability of Submarine (although Paddy Considine gets a great cameo as a sci-fi TV star), but it feels like a more accomplished film. The aesthetics and cinematography are superb, with shadows effects and creative lighting giving it an atmosphere unrivalled with other mood pieces – it’s a disquieting viewing in tune with Simon’s own angst and anguish.  [4/5]
Posted by The Columnist at 04:16