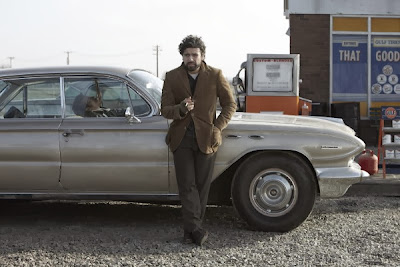 A new Coen Brothers film is always met with strong anticipation and a flurry of gushing critics. Personally, I usually find their work overhyped for the most part, as I only really love a handful of their films - Fargo, The Big Lebowski, No Country For Old Men, and True Grit - and quite frankly, could leave the rest. Happily I can add Inside Llewyn Davis is one I couldn’t leave - it’s one of their best films. The film plays out like a love letter to Manhattan, or more specifically, Greenwich Village, and follows the hard times and tribulations of Llewyn Davis, one half of a formerly successful folk duo. His old partner is alluded to throughout the film, but we only find out what happened later on in the film – thankfully the Coens are never rushed to reveal everything from the offset. Anyway, Llewyn is simply trying to find some open-mic work, and more importantly, get a record burned. But, as with all woeful musicians, he’s his own worst enemy, and aside from having no money, no house and no car, he’s also a lousy drunk, impregnated his mate’s girl, lost a professor’s cat, sold away his royalties to a potential one-hit wonder, and pretty much pissed off every other friend and acquaintance along the way. This is very much Oscar Isaac’s movie, and his delivery of Llewyn is nothing short of brilliant – he perfectly nails the laid-back chancer, and shines in any exchange with Carey Mulligan’s Jean, who shows what New York acid-sarcasm really is.


As is commonplace with any Coen brothers film, the ensemble cast is brilliant, with John Goodman,  Garrett Hedlund, Justin Timberlake, Adam Driver and F. Murray Abraham joining Isaac and Mulligan. There’s also a ginger cat which gets possibly the second highest amount of screentime after the eponymous lead, along with an array of colourful supports who Llewyn crosses paths with along the way. Another character is the music, such great music all the way through and such great caricatures in this world. Oscar Isaac has a silky-smooth voice, and like Joaquin Phoenix did in Walk the Line, Isaac really shows his raw talent as a singer and performer.


This movie showcases how cool the Coens are, as there are few directors out there (Tarantino is one), who can make a film feel so charged and electric from the simple scenes of meaningless dialogue or awkward silences – the road scenes with Goodman and Hedlund are superb. America hasn’t looked so cool for a while, and the indie vibe this film gives off is surely no accident, it never risks over-exposing the folk scene, overdoing the music or saturating us with a New York message; instead, like Llewyn Davis himself, it refuses to sell out, and stays true to its roots. Just a pleasure to watch, this is the Coen brothers at their very best. [5/5]
Posted by The Columnist at 10:34