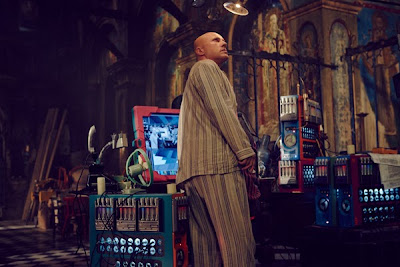 Terry Gilliam completes his ‘Dystopian Trilogy’ 28 years after Brazil was released, and 18 years after Twelve Monkeys. This latest addition is The Zero Theorem, which has been highly-anticipated since the excellent Christoph Waltz was cast as the lead, and such names as Matt Damon, David Thewlis, Tilda Swinton, Ben Whishaw and Peter Stormare signed on. After some dismal efforts from Terry Gilliam, there was some hope this would be a return to form from his earlier days directing.


The films sees Waltz’s character, Qohen, a computer programmer living in an abandoned church in an Orwellian world. His daily job sees him searching for the meaning of life via a block-building formula to reach the 'Zero Theorem'. He is particularly driven by his work due to a past incident: he was once speaking to a caller who was about to explain the meaning of life when the telephone was cut-off. Since then, Qohen has been unable to get on with life, suffering existential angst and waiting for the caller to phone back. After being permitted to take his work home and stay in the confines of his abode by Management, his shadowy boss, he is visited by the seductive Bainsley, and Management’s computer-whizz teenage son Bob (not to mention a few weird and wonderful creations from the deranged mind of Gilliam). Between Bainsley and Bob, they manage to get Qohen to overcome some of his more primitive fears, although Qohen can’t help thinking something is awry, and they are all just pawns in a grand master plan.


The Orwellian dystopia that Gilliam has created is prophetic – iPads glued to palms, scant fashion wear, advertising slogans which follow citizens, signs not permitting anything – like today’s society on speed seen through a kaleidoscope. It’s quite something, and the depiction is so inventive and peculiar you know it couldn’t have come from anyone but Gilliam. Sadly, there isn’t a lot by way of plot to grasp hold of, and there certainly isn’t any character to jump in with and root for. It’s a pre-requisite that a film needs to evoke empathy somewhere, whether it’s with character, place or plot, but The Zero Theorem feels very unsatisfying, and ultimately, inconclusive. Don’t get me wrong, the ending is just about tied up (rather frustrating though it is), but it’s hard not to wonder what the point of it all was. There’s pretty much nil to take away with you, and certainly not any favourite moments or memorable scenes – the whole piece is like stepping into a vaguely cohesive dream.


Not as good as the previous two films in the ‘Dystopian Trilogy’, but very much a Gilliam film with all the usual trademarks – gaudy colours, nightmarish society, circular dialogue and bizarre names: check. Just a shame that he can’t focus more of his attention on delivering  decent plot. [2/5]
Posted by The Columnist at 10:36