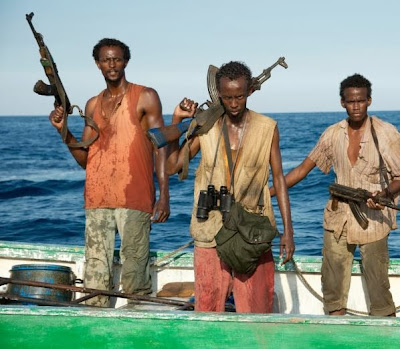 Paul Greengrass first wowed audiences with his TV film Sunday, Bloody Sunday, which showed the real-life events surrounding the 1972 massacre of 26 protestors in Northern Ireland by the British Army. Since that early work, he did the same again with United 93 about the 9/11 aeroplane which didn’t reach its intended target due to the bravery and courage of the passengers on board. Greengrass has a special talent for building suspense, and his brilliant takes on the Bourne franchise (Supremacy and Ultimatum) have thrown the jittery handheld cam into the mainstream, now the de rigeur mode of filming any chase scene. Like his two earlier works based on true events, Captain Phillips is the story of the American shipping captain who’s vessel was taken over by Somali pirates, before they took him hostage and gave chase in an small emergency submarine to Somalia with the US Navy in pursuit.


Tom Hanks is having something of a comeback (not that he ever really went away, more of a hiatus) with his lead roles in Cloud Atlas, Captain Phillips and his upcoming role as Walt Disney in Saving Mr Banks. After watching Captain Phillips I was reminded why this man is one of the most successful actors of all time – we are drawn to him every time he is present, he evokes that everyman quality missing from the Abercrombie abs of most leading men; basically, he can hold the screen on his own and generate empathy in most people. As a casting choice, no-one else would have done: Tom Hanks is Captain Phillips.
Greengrass opens up his latest with some insight into both sides of the fray, revealing the mindset and pressure from the Somalian side, as well as the crew on the MV Maersk Alabama. After leaving Oman and heading for Mombasa, Phillips and his crew spot two small skiffs heading their way – the pirates having chosen the Alabama due to being alone rather than in a herd of freighter vessels – but after some intelligent radio tricks and increasing speed they deter the pirates. He tells his crew they’ll be back, and you can see in their eyes that everyone knows this to be the case. So starts the elevated pulse. It’s not long before the pirates are on board and trying to take command of the vessel, but things don’t exactly do according to plan, and a standoff ensues with each party holding a bargaining prisoner. Although the Alabama crew manage to evade capture and subsequently maintain control of the ship, the pirates’ escape results in Phillips being imprisoned in a lifeboat with them. It’s here that the heartbeat ratchets up a notch, and the last 45 minutes are suspenseful and dramatic cinema at its very best.
It’s a story worthy of cinematic adaptation, and as with most films ‘based on real events’ (which used to be ‘based on a true story’) it never hurts to have the usual humdrum of whistleblowers and naysayers to challenge the story’s authenticity, only to be countered with equally (authoritative) sources stating accurate portrayal. Either way, it’s been safely assumed that the film is pretty darn close to the actual events, perhaps with some dashes of artistic license here and there: par for the course I say. What’s so great about Captain Phillips are its three men: Tom Hanks, Barkhad Abdi, and Paul Greengrass. Only with Greengrass can what is essentially a blockbuster Hollywood cash-cow become an intelligent and tense thriller, and have critics and viewers alike swooning in relief. It’s a sure-fire example of how to make a blockbuster for adults – never mind spandex, super powers, giant robots or secret agents. Without Greengrass, this film could easily have fallen flat on the wayside (although Ron Howard who was originally down to direct this before he and Greengrass swapped projects – Rush for Captain Phillips – would be my next favourite choice for the helm – forgive the pun). But for all the praise and gushing for its masterful director, the project wouldn’t be what it was without its two strong leads.
Tom Hanks and Barkhad Abdi are mirror opposites of each other: one a burly, white, wealthy American, dressed in pressed slacks and working within his knowledge and cod; the other, a skinny, black, poor Somalian dressed in rags working on the spur of his cuff. When Abdi, who plays Muse, tells Captain Phillips ‘Look at me. Look at me. I am the Captain now’ you can’t avoid a chill down the spine – so cold and calculating are his motives. Very rarely do we sympathise with the main villain, that’s not there plot device, but by opening up the motives behind the pirates we begin to understand why they do what they do. When an actor as raw and unnerving as Abdi comes along, you need to put him opposite a big-hitter, and clearly Hanks was the man for the job. I predict big things for Abdi, but let’s hope he avoids being type-cast into similar roles.
The final winner is of course the US Navy, as we all know Phillips was eventually freed, but this knowledge of the outcome didn’t detract from the final action piece of the film, and the moments that follow, is where we see Tom Hanks is all his Oscar glory. Phillips’ final coming-to-terms with his own survival is powerful stuff, so distressed and tense from the preceding moments, he almost reaches a catatonic state by the time he’s checked by medical, and it’s in these really difficult moments of acting that Hanks knocks it out the park. A tense and fraught blockbuster, Captain Phillips is definitely the best Hollywood action of the year. [5/5]
Posted by The Columnist at 12:00