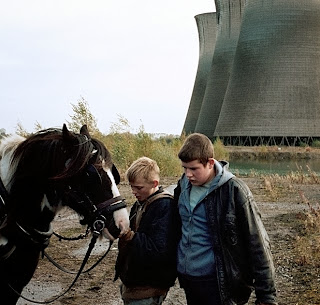 Ken Loach and Mike Leigh may be the Godfathers of social-realist drama, at least in Britain anyhow, but it’s clear they’ve passed the mantle to Andrea Arnold, Sally El Hosaini, and Clio Barnard, three women who have released radical works capturing Britain’s blue-collar underbelly. Barnard’s last film, The Selfish Giant, takes its name from an Oscar Wilde short story, although the Selfish Giant and his beautiful garden of the original tale have been replaced by Kitten, a gruff metal dealer and his scrapyard, all set amidst the backdrop of Bradford’s poverty-stricken estates.


Connor Chapman plays Arbor (a nod to Barnard’s last film), a small, angry, talkative lad with some definite attention-deficit issues to contend with.  His best mate Swifty, played by Shaun Thomas, is big and luggish; the quiet one with a passion for horses. After Arbor intervenes when some bullies are going for his mate, the two get excluded from school, which is music to their ears when they consider how much scrapping they can do, and consequently, the money they can make. After they run into Kitten (Sean Gilder), an all-round dodgy dealer, so starts a life as adolescent scrappers, and to give Swifty the added-incentive, Kitten also keeps horses for racing against the local traveller community.

The real victory in The Selfish Giant is the fine acting from its two young leads – Arbor and Swifty truly convince you of their plight as kids living on the breadline, and the family scenes could almost be taken from a documentary – so realistic and ordinary are they that you suspect the scenes were filmed as guided improvisation. There’s a special bond between these two boys, they are compatible opposites who seem like a whole when together, and they each seems to complement the other. Their existence is bleak, but despite the conditions and situation they find themselves in, there is also a sort-of passage or transcendence into something far more beautiful: when the two boys set off on a day’s work, riding over misty moors and down quiet urban streets, they become frontier men, out prospecting for their own gold, ‘bright wire’.

It’s an accomplished film from someone with a keen eye for detail, and depicts a very real England without excessive misery and abuse, which is ubiquitous (and usually superfluous) for a tale like this. That said, the ending definitely pulls on the heartstrings, and the shocking moment is carried out with such realism and agony, that you realise how those unforgettable and lifeshifting moments aren’t heralded with a fanfare of trumpets, or adagio of strings, or prewarned with a slow crescendo of piano, but instead, are met with unsettling silence. Luckily this silence is then played out, bust open and looked inside to see the impact on those around it. It’s a beautiful film with a dignified ending, not least from the Selfish Giant himself. [4/5]
Posted by The Columnist at 10:43