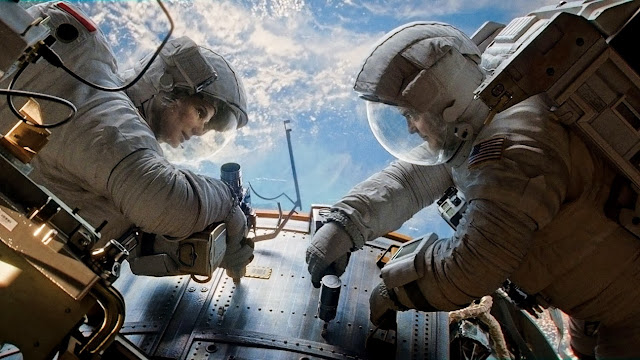 Not since Avatar has a film been so perfectly constructed for IMAX 3D viewing. Gravity was one of those films that silenced the audience from its trailer; stark and beautiful, with the action sequences so magnificent and believable they made space look utterly, miraculously, real. The man behind the magic: Alfonso Cuarón; he who brought us raunchy Mexican road movie Y Tu Mama Tambien, dystopian thriller Children of Men, and the third instalment of the Harry Potter series. It's a diverse range, but nothing in his catalogue (or anyone else's) compares to this awesome space opera.

Of course, it's a given that there are other great films set in space, with all the thrills and spills to keep a cinema-goer entertained, but Gravity relies as much on its setting as it does on its plot - not dissing Sandra Bullock, but space is the real winner here. Gravity opens with an insert explaining that life isn't possible in space, and goes straight for the throat within about five minutes, when everything gets very intense.

Without any feeble backstory or goodbyes, we cut straight to Sandra Bullock's Dr. Ryan Stone on her first space mission to fix the Hubble telescope, under supervision of space vet Matt Kowalsky (George Clooney). Its a chillingly calm opening, showcasing some stunning views of Earth and space, listening to the silky smooth tones of George Clooney as he space walks (basically jets about in space with his jet pack) around the station. After report of a wave of debris caused by the destruction of a satellite on their orbit, things go from bad to utterly terrifying. We knew it was coming from the arresting marketing campaign which mainly involved Sandra Bullock's heavy breathing as she floated into the dark abyss, but when it does, boy oh boy are we in for a treat. Cuarón utterly astounds with his CGI capture and gobsmacking backdrop, and in IMAX 3D the action sequences are so exhilarating you wonder if the medium hadn't been created for this one film alone.
The action follows our heroes between a series of check-points, in the form of an abandoned space station or escape pod, as they venture on a life-or-death journey to get feet firmly planted back on Earth. It is essentially a series of races against the clock, as Stone and Kowalski confront everything that can go wrong in such an inhospitable environment, whilst trying remain level-headed enough to act fast - part of the key training for astronauts - and most important of all, survive. It's tense stuff, and barely possible to eat during the it's 91 minute running time (all three of us had full cups of sweets at the end) which doesn't ease up for enough time to catch a steady breath.

It's easy to envisage the temptation to put all your eggs in one basket with visuals and cinematography like this, but Gravity doesn't sacrifice on plot, and gets us to really empathise with these two astronauts on their plight, such is the realism of what is before us. Both lead performances are strong, butt his is Bullock's movie, and it's inevitable she's going to get another Oscar nomination (in a year with stiff competition from Cate Blanchett, Judy Dench and Emma Thompson). However, as mentioned earlier, space is the real winner here, as is its director, and Gravity truly is the cinematic triumph lauded by critics and viewers alike the world over. Cuarón has reached out into the void and brought the magic back to cinema. [5/5]
Posted by The Columnist at 01:21