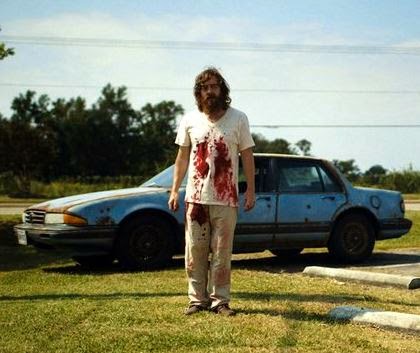 It’s been one of my most-anticipated indie flicks of recent times, and boy did it pack a punch. Jeremy Saulnier’s disquieting revenge flick sees Macon Blair as dishevelled vagrant Dwight Evans, living out of his rusty blue Pontiac and surviving on carnival leftovers and breaking and entering into empty holidaymakers’ homes for a wash. It’s a lonely and desolate existence, and this beautiful introduction perfectly sets up the subsequent thrills.

Dwight’s quiet and content routine is upended when he is delicately brought in by the police, who inform him a man imprisoned for a dreadful wrong against the vagrant (and likely the reason for Dwight’s current state) has been released early. The sheer devastation in Dwight’s eyes is visible, such drowning pools of emotion are contained within. Whatever this man did, he clearly ruptured Dwight’s family and wrought permanent devastation upon them. So begins Dwight’s flight for revenge, more drama than thriller, as he clears up his appearance, searches high and low for a suitable weapon, and sets out to kill this man who wronged him.  However, violence begets violence, and Dwight’s actions ignite a tit-for-tat series of events, which could rain more destruction down upon Dwight and his surviving family members.

Blue Ruin is a smart film which has appropriately been compared to some of the Coen’s works – namely Fargo or Blood Simple – and manages to keep the restraints on its motives, actions and dialogue, which gives a more candid, blackly comic and believable film. Dwight is not exactly a dab hand at retribution as he fumbles through his attempts of revenge, but as the film plays out we can see that he is adaptable and intelligent, perhaps just thoroughly out of practice when it comes to actually interacting (whether for good or bad) with other human beings. His arc is a pleasure to witness, and his ending is perhaps more heroic than we would have initially thought. What more, the supporting cast are also very watchable, and Devin Ratray’s performance as an old school buddy of Dwight’s is simply masterful – reprising his excellent comic-timing as seen in Nebraska.

The title Blue Ruin can be neatly attributed to any one of its meanings – cheap gin or rum, utter ruin,  desolation – but is actually referring to the rusty blue Pontiac which houses our protagonist, giving the title an appropriate resonance to the film, as its meanings all tie in with a state of homelessness or vagrancy – physically and emotionally. It’s a tightly-scripted revenge tale, which keeps character above plot at its forefront, and is deserved of all its surrounding hype. [4/5]
Posted by The Columnist at 04:18