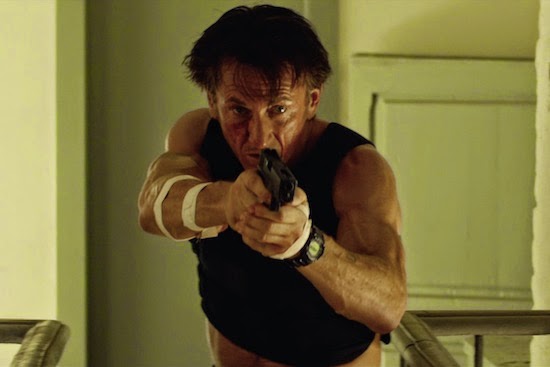 This review only really scratches the surface of The Gunman for two reasons, 1) If I start ranting about this one, I’ll never stop, and 2) Christopher Orr at The Atlantic depicts my sentiments perfectly is his scathing review which I implore you to read.

Before The Gunman hit our screens, it was already dubbed “Sean Penn’s Taken” – we have the same director, the same grizzled-older-man-uses-past-lethal-skillset-to-hunt-find-and-kill-nefarious-types lead character, and the same mentality that men are awesome and women are pathetic. Of course, women are also lovely, because, as we see here and in countless other misogynistic American films, the heroine spends her time in summer dresses running around with children in playgrounds. Seriously? Another one?!

Anyway, The Gunman makes Taken look Oscar-worthy by comparison, so unbelievably poor is its premise, plot, execution and reveal. I won’t go through the plot in detail, as The Atlantic has that well and truly covered (seriously, read it!), but to give you an idea of the audacity and stupidity of it all: Jim Terrier (Sean Penn) is an ex-Mercenary working as a humanitarian aid worker in Africaaah, when some local militia try and kill him. As they were looking for the ‘white man’, Terrier somehow jumps to the assumption that some serious people have a hit out on him, and he needs to delve back into his past to find out what happens. He flies all over the world, and realises that Javier Bardem’s ridiculously hammy friend who literally eye-humps Penn’s missus is part of the conspiracy. So are some other guys who acted shady and sly throughout the film. Terrier, in a tight, camp, black t-shirt, just moves from city to city, growling, tensing his muscles and dispensing pain on everyone, because basically everyone has betrayed him. (It’s worth noting here that the supporting cast is made up of Mark Rylance, Javier Bardem, Idris Elba, and Ray Winstone – a stellar cast by all accounts, yet utterly devoid of any good lines, interesting characters or decent scenes. Everyone who appears in this film is devoid of credibility for 90 minutes or so.)

Like Sean Penn and his sanctimonious sermons about the third world, poverty, and constantly sticking his big nose into problems a self-loving millionaire actor from Hollywood couldn’t possibly grasp, Jim Terrier is also very serious, and very arrogant. He’s so serious (and hard, in case you missed it) he even beats up football hooligans in London pubs, and takes his shirt off maybe ten times throughout the film: he answers the door shirtless, he showers at every available opportunity, he goes surfing on his own at dawn (one of the most hilarious interludes to a film I’ve ever seen), he sleeps with his missus, he takes of his shirt again so he can stare at himself in the mirror, and of course, he has to take his shirt off so his woman can stand naked at the window with it billowing around her. It’s so utterly moronic. The repeated attempts to remind the viewer that Penn is muscly, tough, serious, and conflicted, is nothing short of laughable. In case you’re wondering, the answer is yes, Penn did write the script.

I’ll leave it there at risk of exploding into a fit of rants. The film is appalling, one of the worst I've ever seen. Taken and its star Liam Neeson had the decency to keep some tongue in cheek, and Neeson was never short of heroic as he brutally punished the human traffickers and gangs that occupied this world. Sure, it was far from being a realistic crime thriller, but it was vigilante action at its best, which has earned it cult status. Penn is not Neeson. He’s not likable, and he’s far too self-aware to ever convince in this kind of role. Desperately gripping youth in his dying clutches, with botoxed face, floppy hair and a ridiculously overworked physique, Penn can not play the ‘geriatric action hero’ film trope successfully played by Neeson, Willis, Eastwood, Stallone, and Gibson. The Gunman is an embarrassing attempt for Penn to franchise himself as an action hero, a horrific misfire which seems to kill all the cast and crew as well. [1/5]
Posted by The Columnist at 03:24