There's been some recent changes to the blog due to a number of reasons...blogspot nuisances, Apple/Window compatability, boredom (I could go on...). Despite this, please bear with me and keep checking in to have a look, it'll be fleeting at best, and the final design will be in polace within the next couple of weeks if indeed it does change again). Also, if any of you do want a Black List script, please comment your email and something will be sent over - Looper? Django? Dredd? Wettest County? Broken City? Seven Psychopaths? All You Need is Kill?

Anyway,there's been a couple of interesting bits of movie news (collected from Empire and The Guardian and the blogvine), and rather than try and compose some interesting articles revolving around each piece of information, it seems more appropriate to just get it on here for the weekend. Firstly, it has been revealed that Wes Anderson's latest outing, Moonrise Kingdom, will be opening the Cannes Film Festival 2012, and to mark the occasion, here is the magical new poster for the feature...

Featuring Anderson regulars Bill Murray and Jason Schwartzman, alongside Edward Norton, Bruce Willis, Tilda Swinton, Harvey Keitel and Frances McDormand, it's perhaps Anderson's most serious cast to date. The story sees newcomers Kara Hayward and Jared Gilman as Suzy and Sam, two young lovers who run away from home together in 1960s New England. This then causes a local search party to start the search aided in main by a large group of scouts (to whom Sam belonged) and their leaders. It's got the ingredients of an Anderson classic (all his films are instantly classics in my book) and the trailer is very funny, showcasing some heavy weight actors in kooky comedy roles. It has been scheduled for a 25th May UK release date.
Also today we have seen Jerry Bruckheimer tweet the first image from Gore Verbinski's The Lone Ranger, which sees Armie Hammer (the Winklevi brothers from The Social Network) as the titular hero, and Johnny Depp as his Indian sidekick Tonto. The Lone Ranger looks crisp and tough, like the younger brother of Seth Bullock, and Tonto looks like a (psychopath) gothic cherokee, giving an interesting twist on Disney's latest blockbuster (reported budget is $250m). Let me know what you think of the image? Liking the style? Hammer look too young for Reid? 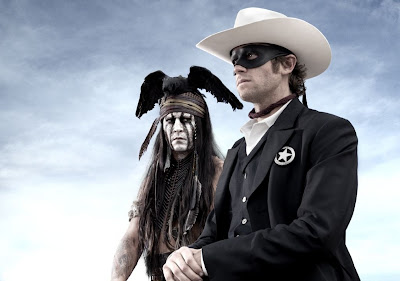 Lastly, there are finally some sneak peeks at the style for the new Judge Dredd film under the working title Peach Trees, to be released as Dredd. Karl Urban plays the Mega City law enforcer who works in an apolocalyptic futuristic world as a street judge - a cop who acts as judge, jury and executioner. Like Carpenter's pulp masterpiece, Assault on Precinct 13, Dredd sees Judge Dredd and new recruit Anderson getting stuck inside Peach Trees - one of Mega City's most notorious and villanous Mega Blocks - whilst crime boss Ma-Ma (played by Lena Heady) and her gang of cronies try and cut them down. A Mega Block is like a whole town inside a skyscraper,housing tens of thousands of people, as well as having all the amenities a town would have - schools, shopping malls, hospitals, places of work etc.
I finished the script last night, and aside from the basic premise above, there is a drug at the center of the story called Slo-Mo, which makes the user see everything in slow motion. There are some great scenes utilising this effect, and kudos to Alex Garland for coming up with such an inventive way of justifying the slow motion action scenes! Ma-Ma, the drug kingpin in the Mega Block, is the head of this syndicate and she runs a gigantic gang called the Clan, most of whom experience first-hand the punishment of Dredd and his psychic sidekick. The script couldn't hold up against genre pics Looper and Django Unchained, but is a tight screenplay for a hollywood blockbuster, with some gritty dialogue and great action sequences (from reading the script, I can't see it being rated less than 15 or 18). Enjoy the pics below: