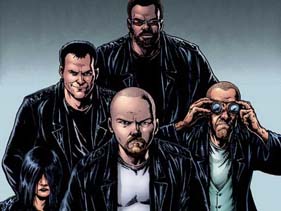 I am currently reading the awesome Garth Ennis comic book series The Boys, about a CIA-backed group who police the superheroes in a time where ‘supes’ are made by huge corporations by using the special Compound V. All righteousness, honour and courage have gone out the window, and the superheroes are basically allowed free reign, with sex, drugs and complete abandonment being on the menu most days! They embody debauchery at its most depraved and heinous. However, thanks to our five heroes, these super-beings are taught their lessons the hard way, for The Boys have also been injected with a super-drug giving them the strength and agility to match their super enemies. Clad in black trenchcoats and quick with an insult, The Boys consist of Billy Butcher, the gang’s tough British leader, Mother’s Milk (MM), the brooding black heavy of the gang with an intriguing backstory, The Frenchman, a French war veteran with a penchant for ultra-violence, The Female (of the Species), the gang’s only woman – a young mute girl with a dark past whose competence at killing is slightly disconcerting, and the newest addition Wee Hughie, a street-smart Scot (based on Simon Pegg) taught the ways of superhero policing after his girlfriend becomes collateral splatter amidst a superhero fight. Each of the team have their own personal grudge or vendetta against the supes making them a formidable and vengeful enemy for superheroes all over the world. The origins stories are dark, textured fiction, and the series has more balls and brass than almost any other comic book series I've read (except maybe Preacher).
Adam McKay, he of Anchorman and Step Brothers fame has been trying to get a film adaptation off the ground for a while, and although he doesn’t seem like an appropriate choice, it’s good that someone is keen to get this thing green-lit. Of course, I'd much rather David Fincher or Neveldine & Taylor were shouting the orders, but we'll see. On that note, I thought it would be cool to assess who would be the best casting choices for the lead characters. See what you think and as always, it’d be interesting to hear any thoughts below: 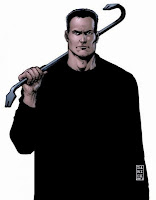 Ray Stevenson - big, British, brooding, a great casting choice.
Tom Hardy - perhaps too young, but certainly got the chops and brawn for it.
Clive Owen - very British and very mean if he needs to be 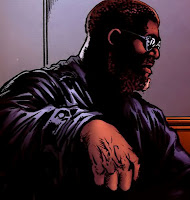 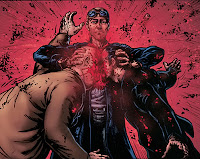 Vincent Cassel – is there really any other choice?! Cassel is Frenchie!
Matthias Schoenaerts – the next big thing after Bullhead, Matthias can play tough and go psycho rather well I've heard.


The Female of the Species 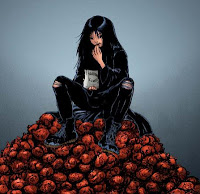 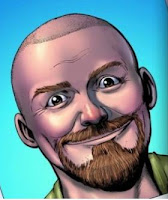