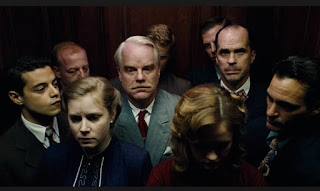 Paul Thomas Anderson is cinema’s golden boy. Not only does he pay homage to the golden years of cinema by shooting on 70mm (or the like) and favouring powerhouse performances with tantalizing visuals over quick bucks and special effects, but he treats the viewer with respect. He knows we’re not stupid. He doesn’t feel the need to have to tie every loose end, decipher every ambiguity and box it up with a nice bow. Just think of his filmography – Boogie Nights (’96), Hard Eight (’97 - aka Sydney), Magnolia (’99), Punch-Drunk Love (’02), and There Will be Blood (’07). He delivers right hooks, haymakers and kidney punches. No other director would dare to touch [insert cult here] right now, which seems to be ever-growing, with stalwart supporters in the form of some Hollywood big-hitters - Tom Cruise, Will Smith and John Travolta. The Master is Anderson in his provocative element.


Like There Will Be Blood  before it, The Master  starts with a dialogue-free opening following one man through a tumultuous mini-plot. Daniel Plainview worked the land, digging and digging until he found his silver, and then his oil, with mishaps and shocks along the way. Here we see Joaquin Phoenix on career-best form as Freddie Quell, a Navy sailor going about his routines, of drink, work, sleep, drink, fight, drink, lark, drink, work, drink. As we learn quickly, Freddie has a drinking problem, and he passes most of his time concocting potent spirits in order to drift away into the realm of drunken oblivion – a tortured soul like the best of Anderson’s creations. Freddie is delivered with such force, all downward smiles, sharp angular creases and unfriendly glances; Phoenix at his true craggy best. It’s not long before Freddie is out of the war and landing himself into trouble from his potent drinks, and so the life of a drifter begins, and it is along this path that he meets the charismatic and authoritative Lancaster Dodd, the Master of a new cut-like phenomena called The Cause. Riffing on Scientology, and paralleling L. Ron Hubbard in every which way, Anderson is almost certainly lying when he says the film has no correlation to the real-life cult. However, The Master, contrary to any previous thoughts, is very much Freddie’s story, not the Lancaster’s or that of The Cause.
Freddie and Lancaster develop a kind of father-son relationship, which develops into boss and henchman, and eventually Master and servant. Freddie is compelled by Lancaster’s unwavering committal to The Cause, and his decisive leadership of so many lost sheep, like the pied piper leading an army of rats away, before returning to take the children instead. It’s the arc of their relationship which stands upright as the backbone to the story, and the script and its delivery is pitch-perfect – only Anderson would come up with such intense scenes. At times the plot is so highly charged, it’s easy to breathe a sigh of relief when the shot changes, and although it’s not enjoyable to view, it’s an amazing experience which  saturates your afterthoughts.

One of my favourite aspects of Anderson’s filmmaking is his devilish ability to make the viewer squirm. He can do awkward like no other director. Freddie’s cleansing process through a series or ritualistic tasks and personal interviews is acting at its absolute best, and it’s hard not to writhe and roll in your seat during these confrontations. It was a similar feeling in There Will Be Blood for almost every exchange between Daniel and Eli, and Anderson has absolutely mastered the art of awkward, and his score emphasises this feeling of discomfort, with Jonny Greenwood again delivering some off-the-wall sounds like they’d been made by disused parts of a ship freighter, tapping, scratching and bubbling beneath the surface of the skin.

Aside from Phoenix’s winning performance, we also have Anderson favourite Philip Seymour Hoffman as the Master himself. It’s a sublime performance, presenting the leader as a man of wisdom, of philosophy, yet also embodying a darker streak if questioned. In one great scene, we see him interrupted and challenged by an onlooker art a party who finds The Cause reminiscent of a cult, to which Dodd exclaims sharply ‘Pig fuck!’ before composing himself and delivering rhetoric of the highest and darkest order. We are wound as tight as a banjo string at this point. His wife Peggy Dodd is portrayed by Amy Adams, again delivering a career-best, and it’s she who plays antagonist to Lancaster’s sometimes more affectionate or forgiving leanings, and she delivers her lines with a sense of malice or disgust, like a girl raised on hate within a Baptist Church – only the women in Red State have chilled me to the bone to this extent. Everyone around them is pitch perfect, and from Anderson, we wouldn’t expect anything less. Oscars will call.

I seized the opportunity to catch this in 70mm format at the Odeon Westend, and it was a visual treat, with plenty of beautiful cinematography and landscapes to please the cineastes out there, although most probably wouldn’t notice the difference unless played side by side with a digital copy – sadly, I think I may be of that school, but it was still a treat for the eyes nonetheless. Aside from this old-school choice of capture, Anderson has his usual continual camera motions and visual trickery demonstrating he is still one of the foremost directors working today. The Master may not be my favourite film of his, but it certainly ranks as one of his most accomplished, tackling sore subject matter with raw narrative. Let’s hope we don’t have to wait another half decade before his next feature, which is supposedly Inherent Vice, an adaptation of Thomas Pynchon’s cannabis-fuelled private eye novel. Can. Not. Wait.