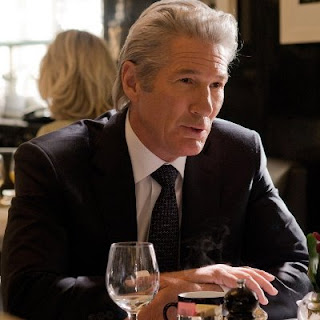 Nicholas Jarecki, a thirty-something NYU film school graduate has made a thriller far beyond his years. Arbitrage sees Richard Gere play Robert Miller, a New York hedge fund magnate whose life is starting to unravel from the frays. As he turns sixty, Miller is trying to sell his hedge fund without the buyer or his shrewd daughter discovering that he’s been cooking the books after a really bad investment, and to boot, he’s also being investigated by a cutthroat NYC copper (Tim Roth) after a car accident has left a dead woman at the scene. In short, it’s not a good few weeks for smooth operator.

Not a traditional thriller, Arbitrage avoids any of the clichés of the thriller genre, blurring the lines with who is good, and who is not so. A super-rich financier is hardly the sympathetic protagonist the everyday Joe can root for, and his antics – fraud, infidelity, corruption – are hardly those of a good guy, yet still we find ourselves wanting him to win, to succeed. Richard Gere has never been better, and Miller’s slick charm and tailored suits are carried off perfectly by the silver fox, who seems to have the perfect demeanour and looks for the part. His character acknowledges his role as patriarch to his family, friends and employees, and it is with this sense of duty that Miller seems to excuse himself from any wrongdoings. After all, is in not the duty of a patriarch to protect his family and assets before all else? Even if at the expense of morality or even just common decency?
Arbitrage is an adult thriller without the fast thrills and frills commonplace in the genre. There hasn’t been a film like this since Michael Clayton, which also sees an aging Hollywood charmer up front and centre as well, and Gere is just as good as Clooney. Like Michael Clayton, Arbitrage focusses on character development as much as plot, and this decision serves the film in great stead, with some excellently nuanced performances from Gere, Sarandon and Marling, and a superb final act as the character arcs complete.  4/5
Posted by The Columnist at 04:45