REVIEW: Welcome to the Punch 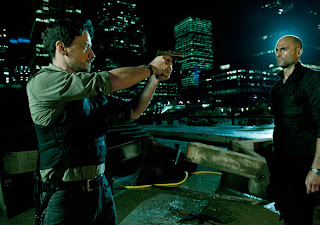 Newcomer Eran Creevy made his debut with ultra low-budget 'dealer' flick, Shifty, most of which was set around a housing estate locale in London. Now, with the backing of Sir Ridley Scott, Creevy has added a couple of zeros to his budget and made the ultra-glossy and highly stylised Welcome to the Punch. What more, the ace British cast from Shifty (Riz Ahmed, Daniel Mays, Jason Flemyng) has also been upgraded, with James McAvoy, Mark Strong, Andrea Riseborough and David Morrissey (albeit with Mays and Flemyng still featured this time around).                                                          Moving from the suburban estate to Canary Wharf and the docklands, Creevy's latest sees dogged Det. Max Lewinsky (McAvoy) trying to catch his mark, criminal mastermind, Jacob Sternwood (Strong). However, after a high speed pursuit ends badly for the detective, and he thinks he has to live out his days a police pariah, he's given a lifeline - Sternwood's son has been shot and hospitalised in London. Knowing his rival will return for his kin, Lewinsky sets the traps to make sure his nemesis doesn't evade capture this time round. So far so good, but then we are thrust into a conspiracy involving cops, assassins and politicians, although which ultimately reveals itself to be rather bland. Admittedly, it's a lot of fun getting there, but Punch suffers from it's relentless pace - we barely get a moment to breathe, and neither do the characters. Granted, the action is slick and stylish, and seeing London shot in cool blues and icy steels (definite influence of Michael Mann!) is a real treat, but we miss out on the humanity, and any splinters of backstory. Admittedly, the issue with style over substance weighs heavier after the film has finished, but the main gripe of lacking humanity niggles throughout - Lewinsky just isn't given enough scope or depth to be any real threat to Sternwood, and that is perhaps the film's greatest downfall.

McAvoy unfortunately will never be convincing in the tough guy role, and although a good actor with good films, his stature and boyish features are no match for the looming presence of Mark Strong, and the pair's mismatch on screen - as actors rather than characters - is where Welcome to the Punch falls from excellent to pretty good.  [3/5]
﻿
Posted by The Columnist at 07:35