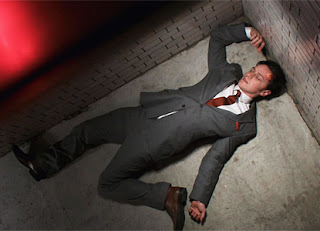 Trance is something of an enigma. I don’t know why. I can’t really explain it. My mate Olly, who upon being asked if he liked the film turned to me with a rather desperate grimace and said, “I don’t know. I’m still undecided” is the best way of describing the initial reaction. Danny Boyle’s latest mind-bending extravaganza is a twist-turny thing, like Inception via Shallow Grave. It takes a few days to sink in, and there’s no denying that Trance is a difficult watch – for starters, there’s no protagonist we can get behind; everyone is morally compromised to an extent, seedier, darker and more selfish than originally thought. However, these unsympathetic characters aren’t just ‘baddies’ in the same way Rian Johnson’s Looper demonstrated, where we could root for Joe and Sara despite their darker sides, as here, we just don’t really like anyone, and this dislike grows until the end. This aside, Boyle is definitely a maestro when it comes to film-making, and Trance like his earlier films has some fantastic camera angles and cinematography, so at least we are seeing something extremely well-made in the meantime.

On reflection (after about 2 weeks), I think Trance is a superb film, an original high-concept thriller which I would categorise with Inception, Memento, Eternal Sunshine of the Spotless Mind and Don’t Look Now (as professed by Boyle himself). The premise sees McAvoy’s Simon as the ‘inside man’ on a fairly straightforward art heist led by Franck (Cassel) and his gang , however, when he is knocked unconscious after hiding the painting, he forgets its whereabouts and the gang has no alternative than to bring in a hypnotist (Dawson) to try and uncover the memory. Boyle delves into the hypnotherapy process with aplomb, and blurs the lines between reality and virtuality, leaving Trance to play out like a grand denouement, slowly revealing itself to be an entirely different beast than originally thought, and also skewering the characters beyond recognition, shattering initial assumptions.
There is no denying McAvoy is perfect casting for the radical character arc of Simon, certainly more convincing as an awkward art dealer than the grizzled cop on Welcome to the Punch, and Cassel and Dawson are equally strong counterparts, all three never quite revealing their true had - like a 101 in poker acting.
A very intelligent thriller which shows Boyle back on his A game after the underwhelming 127 Hours, this is back in the groove and step of his earlier efforts, amped up with modern flair.   4/5
Posted by The Columnist at 02:22