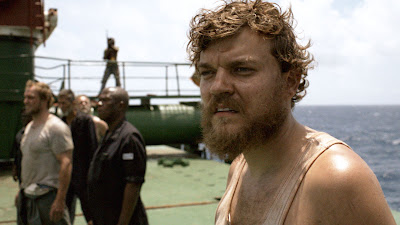 Since Danish drama hit our screens we can’t get enough of it. Coming along during a British drought of meaty drama or fraught crime, the likes of Wallander, The Killing, Borgen, The Bridge and all subsequent sequels have saved us from the monotony of reality TV, cookery programmes and ham-fisted soap operas. Danish drama revitalised our love of television, and since it raised the bar the British output has been far superior to previous years, with the likes of The Village, Broadchurch, Luther, The Hour and Sherlock. It’s hardly a surprise then, that the writer behind razor-sharp political drama Borgen has released this challenging and complex psychological thriller.

Not a thriller in the traditional sense, A Hijacking is the brainchild of Tobias Lindholm, who CV boasts script duties on Borgen, The Hunt and Submarino, and his slow-paced but tense writing is spectacular, opting for realism and tangibility over sheer entertainment; treating the audience with the respect we deserve. The plot sees the crew on board a Danish cargo vessel sailing across the Indian Ocean bound for Mumbai. First off we are introduced to Mikkel, the ship’s cook (played by the brilliant John Philip Asbæk – Borgen’s Kaspar), who has been at sea for a long time and missing his wife and young daughter. This shaggy dishevelled existence at sea is juxtaposed by meeting Peter Ludvigsen (a solid performance from Søren Malling – Borgen’s Friis), a Danish shipping magnate and CEO of the company who owns the vessel, as he and his office-bound colleagues wear sharp suits with cropped hair amidst the shiny metallic and glass décor reminiscent of Scandinavia. Introduced assisting in tough negotiations with some Japanese businessman, the man clearly relishes a hard bargain and it is only after this deal is finalised that he gets the phone call: Somali pirates have commandeered one of his vessels and are holding it and the crew to ransom.
By missing out the take-over by pirates, Lindholm has washed away the action spectacle and subsequent histrionics, and instead indulges us with intelligent cinema with almost a documentarian approach to the negotiation process. Rather than have a professional negotiator do the dirty work, Peter is adamant the responsibility lies with him, and slowly the pressure and tensions rise in the office as board pressure mounts to get the dealings wrapped up as quick as possible, yet the negotiations become more and more frustrating. Meanwhile, on the ship most of the crew haven’t been seen for a long time, focussing instead on only three members – the others’ whereabouts? Who knows? It is this uneasy menace that lurks behind the camera, the implied threat of violence – of which we actually see very little – that keeps us chewing our nails to the cuticle. The pirates are dead behind the eyes, utterly lacking in any compassion or empathy, and yet never become the all-encompassing ‘bad guys’ prominent in most film. Omar, the pirates’ negotiator is a big bear-like family man, yet extremely sinister, always insisting he isn’t a pirate and that he too has the same plight as Mikkel – as Omar too wants to go home to his wife and children – but blames Mikkel’s boss, Peter, for keeping them all at sea by not paying the $15 million. The psychological interference from Omar is hard-hitting, shattering the nerves and fortitude of the crew by using them in the negotiation process: back in Denmark, the hostage negotiation advisor tells Peter to try and understand that they are working under Somali rules now – usual business ethics and practise aren’t relevant here.
A Hijacking is an utterly convincing thriller, and never falls shy of riveting as it depicts the environment, emotions and tension in hijacking with total precision. The acting is on par with the excellent dramas spinning out of Denmark, and Lindholm’s writing and direction make him one of Europe’s hottest new talents. Never has such a disquieting film been so compelling – it’s no wonder it’s being shown to shippers as an example of how the process is handled . [4/5]
Posted by The Columnist at 07:23