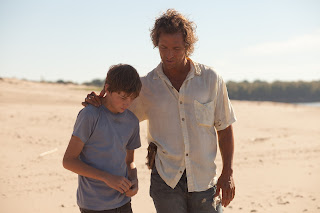 Jeff Nichol’s Mud is one of the best films to be released this year, and certainly one of McConaughey’s best ever performances. It’s a coming-of-age drama set in the backwaters of Mississippi, and follows two local boys, Ellis and Neckbone, as they form an unlikely alliance with a criminal hiding out on an isolated and desolate island in the Mississippi. This criminal is Mud, once a local in these parts and always something of a drifter, and his unwavering loyalty to his childhood sweetheart leads to his downfall, and if he’s not careful, ultimately to his demise. McConaughey is pitch-perfect casting as the troubled loner – his silky delivery of the Southern drawl is hypnotic to hear, which combined with his leathery appearance makes him utterly convincing in the part. The same can be said for the two young newcomers, with Ellis in particular being given some decent meat to chew into, and the support cast is as strong (if not stronger) than its leads – Reese Witherspoon, Michael Shannon and Sam Shepard.
One of the best aspects of the film is its location and setting. The murky backwaters of the Mississippi, with its breadline inhabitants dwelling in dishevelled houseboats, give the film a fantastical setting, almost mythical, and not dissimilar to 2010 independent drama Winter’s Bone. This magical quality is best depicted in a scene which sees the two boys head out in a dinghy at dawn, slicing through the dark still waters to visit another fantastical setting: a boat in a tree. To Ellis and Neckbone, this boat tree-house is the answer to their boredom – giving them a fresh breath of air in their bored stale lungs – and it is here, at this mythical location, where they first meet Mud. In keeping with these fantasy elements that slink through the film like the snake adorning his arm, Mud’s wisdom is steeped in folklore and rich cultish beliefs – a man so in tune with these outside forces that he even ensures his footprints have the cross of Christ in them to ward off evil spirits.
Mud could be a character straight out of a Mark Twain novel, and the film is reminiscent of so much childhood fiction, with Huck Finn, Tom Sawyer, Swiss Family Robinson and even Swallows and Amazons coming to the forefront of the mind. He’s a character who could appear in a Tarantino movie, drifting into a one-road town with that wild hair, snake tattoo and cross-puckered footprints, or even better, a Leone western – a loner with a code – and McConaughey does it so damn well he’d bolster any flick with this character. Mud is a hotpot of a film – adventure, teen angst, thriller, western – blending genres but never losing direction. Easily Nichols’ best film to date, and it could even hold its own against such classics as Whistle Down the Wind or Night of the Hunter. One of the most enjoyable films I’ve seen all year. 5/5
Posted by The Columnist at 07:48