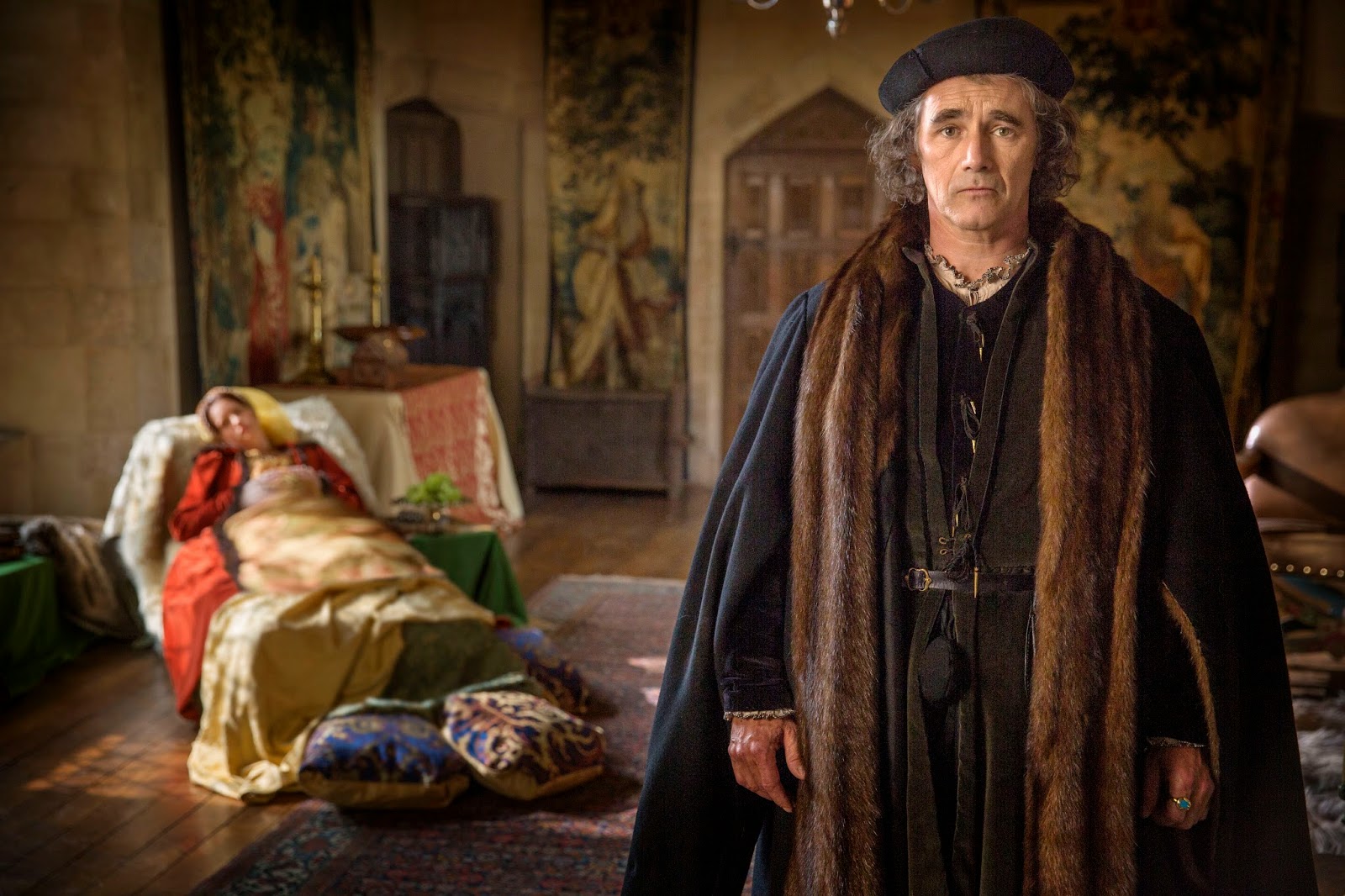 The BBC’s adaptation of Hilary Mantel’s bestselling tome (and it's sequel Bring Up the Bodies) has come to an end after six weeks of sumptuous and riveting television. Set during Henry VIII’s reign in the 1500s, Wolf Hall follows the rise of Thomas Cromwell, played with pitch perfect subtlety by British theatre stalwart Mark Rylance. The costumes, settings and set design were nothing short of resplendent, and although in many period dramas it is often these backdrops and finer details which are the true accomplishments, it is the writing and acting which really stood out here.

When we meet Cromwell, he is the young protégé of his master Cardinal Wolsey (Jonathan Pryce), a diligent and honourable servant with a kindly voice and calm demeanour, it is a masterclass in reservation from Rylance. Cromwell bides his time, he uses his wits and observation skills to out-manoeuvre his opponents; his life is a game of chess. Here is a man who was born into poverty to a Putney blacksmith rising up the most coveted and ruthless of ladders. Aside from dealing with his master’s public shunning and humiliating demise, he overcomes the loss of his wife and daughters, public humiliation from the King and Queen, and ridicule from the pompous aristocrats and Lords who surrounded him during his rise to power. He survives and thrives on his vast network of friends and informants, the original spymaster. Witnessing Cromwell’s elevation is hugely rewarding viewing, he is highly intelligent, ambitious, and quick-witted, always two moves ahead of his peers. Although history explains how Cromwell was a nasty piece of work, Mantel's writing and Rylance's depiction offer up a most welcome romantic alternative; it’s too easy to wax lyrical on this performance. It’ll be hard for anything on the box in 2015 to cast a shadow on Mark Rylance, who has once again proved himself to be a bona fide character actor, and reminded us why he has been called 'the greatest actor of his generation' countless times, with fans including Steven Spielberg, Bryan Cranston, Sean Penn and Al Pacino.

Although Rylance is undoubtedly the star of the show, we can not forget to acknowledge the stellar chops on show around him. Damien Lewis as Henry VIII was genius casting, as he is a man who can flit between emotions as quickly as dropping a smile. His presence is formidable, each time the King struts into a scene he casts a foreboding air, picking his words carefully and delivering each line with an undercurrent of malevolence and supremacy. This is where the show absolutely hit the nail on the head: Wolf Hall is a study of what it is like to be in the presence of absolute authority, as all those who occupy positions in court and the monarchy are slowly treading razor-sharp eggshells around him. Not many could have pulled it off, and after Jonathan Rhys-Meyer’s miscasting in The Tudors it’s good to see Henry back to his menacing self.

Two other stand-outs from the series were Sir Thomas More and Anne Boleyn, played by Anton Lesser and Claire Foy respectively. More is a particularly difficult character to play, especially given his character arc from Lord Chancellor, and named Saint by Rome, to the papist outcast left withering in a jail cell lest he renounces his beliefs under the new reform. We see More putting a prisoner under the rack (a particularly slow and nasty torture instrument of the period) early on, a queasy and atrocious scene, made all the more unnerving by Lesser’s sinister smile during the process. We hate him. He is the foil to Cromwell, another highly intelligent overachiever who is so single-minded and committed in his views he is prepared to commit any atrocity in the name of God, the Pope, Christianity. Yet later on, this same man sits with puppy-dog eyes, broken, as he rejects Cromwell’s offering of freedom if he repent and renounce. It’s a superb performance, and one of Lesser’s (who is a staple of British acting) best to date.

Similarly, the young Claire Foy, who plays the (unofficial) lead of Wolf Hall as Anne Boleyn, is as terrifying and ruthless as the King himself. However, Foy never falls into caricature or villain (think Joffrey from GOT), but holds back just enough to realise she is the product of the world in which she resides – a young, attractive woman from a powerful family married to one of England’s most notorious and petulant Kings ever. Her struggle to conceive and deliver a boy is palpable, and despite her harsh words and mocking treatment of Cromwell, he never quite dispels her as the (possibly) evil woman she is. He respects her climb to power – perhaps recognising the mirroring of his own existence. Even in her final moments she remains composed, professional and utterly loyal to her King, as Cromwell gives her a heartfelt and devastated stare. Foy is perhaps best known for her roles in Little Dorrit and The Promise, but it is here, as Queen Anne where she really shines. A star in making; watch this space.

So there we have it, the BBC has delivered another wonderful period drama; revel in Peter Straughan’s (screenwriter) and Peter Kosminsky’s (director) masterly adaptation of Hilary Mantel’s two novels, and hang your head knowing that it’s highly unlikely we’ll have any British television of this calibre come along again anytime soon. I just pray Mantel finishes her trilogy and we get to revisit Hampton Court again in the near future. [5/5]