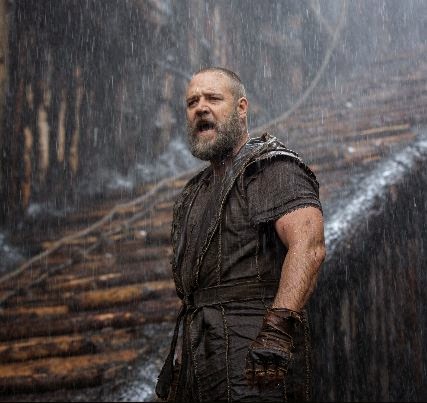 Darren Aronofsky ups the stakes with this latest Biblical epic, after the success of two smaller (and far superior) dramas, The Wrestler and Black Swan. Noah is an extremely frustrating film to watch, not just because of the ham-fisted translation of Noah’s story, but also because it somehow manages to make a sweeping and emotional tale into a messy emotionless blockbuster.
To make matters even worse, Aronofsky decided to cast three of Hollywood’s very worst actors to portray the younger leads – Emma Watson, Logan Lerman and the abominable Douglas Booth – each of them outdoing the other in a game of ‘how shit can I act?’. Furthermore, to really add salt to the wound, Jennifer Connelly and Ray Winstone, usually upstanding actors, give the most sub-par performances of their careers, leaving only butch Kiwi Russell Crowe to pick up the slack and actually deliver some punch to his lines.
The whole film is a mess; a wet, sloppy behemoth which can’t deliver a decent plot beneath the weight of its financial and critical expectations. The saving grace is some particularly nifty CGI to create the rock-formation fallen angels which help Noah build the ark, as well as a couple of sleek sequences which see animals boarding the ark, and also the story of Adam and Eve in Eden, but other than that, it’s just two hours of seemingly bad dramatics - and Ray Winstone’s cockney villain is so hopelessly superfluous to the already diluted and mediocre plot that the only suggestion as to his presence is merely to fulfil the ‘screenwriting criteria’ of having a villain. Noah could have been an amazing retelling, an epic for not only the Christian audience, but also for the general popcorn crowd, but instead, it fell very flat. There’s only so much cockney villainy, amateur drama and hammy dialogue one can actually handle. [2/5]
Posted by The Columnist at 07:04