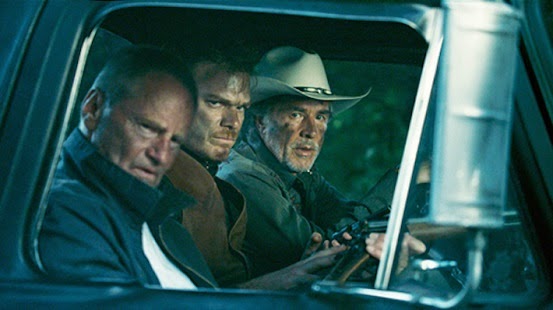 Nick Damici and Jim Mickle, the writer and director behind original vamp tale Stake Land bring us their latest collaboration, Cold In July, a nasty little thriller which feels like two crime films spliced together in the middle.
The first half sees shy small-town picture framer Richard Dane, (Michael C. Hall), unintentionally murder an intruder in his home one night, seemingly to the fancy of the local police. However, when Ben Russell (Sam Shepard), the victim’s tough ex-con father turns up to terrorise Dane and his family, the two men soon uncover some strange police corruption and join forces to investigate. This is where the film takes a sharp fork. To help them out Russell calls up his old buddy - enter Don Jonson as an extravagant private investigator complete with retro car, cock-eyed grin and cowboy attire, and the film takes a complete shift in focus from the corruption/cover-up of the small-town Sheriff and his allies, to a far darker and more sinister plot altogether.
It’s a strange little film, one that explores machismo and violence alongside the question of what it takes to be a man. Throw in a sharp dose of father-son relations, and the ties of blood, and you have a real throwback B movie, something along the lines of what you might expect from the Mickle/ Damici combo. It’s not so much that I didn’t like it, on the contrary – the cast is ace, the style is moody and bleak, and it has Sam Shepard as a badass – but it leaves a lot of questions unanswered, not enticing poignant afterthought, or to leave the audience with a sense of realism, but just left unsaid – almost forgotten. [3/5]
Posted by The Columnist at 09:14